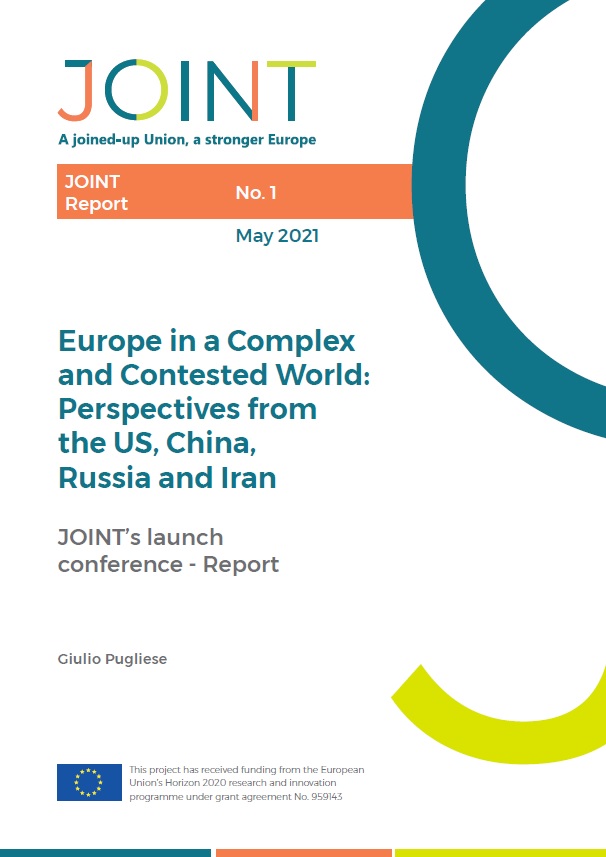 Europe in a Complex and Contested World: Perspectives from the US, China, Russia and Iran

As part of the kick-off event of the JOINT project, a public conference was held on 30 April 2021 as an online Zoom webinar organised by the Istituto Affari Internazionali (IAI), the coordinating institution of the JOINT consortium. The meeting was held virtually because of ongoing limitations to travel and gatherings due to the covid-19 pandemic. The overall number of participants via Zoom was 187, with additional viewers tuning in from dedicated LIVE streaming services hosted by IAI’s social media channels (Facebook and LinkedIn). The conference was recorded and has been uploaded on YouTube and JOINT’s website.

The public conference was chaired by Nathalie Tocci, Director of IAI and JOINT Project Supervisor. Five members of JOINT’s Advisory Board participated as speakers, namely:

Nathalie Tocci’s opening remarks introduced the JOINT project and its research goals, namely identifying the conditions to make EU foreign and security policy more joined-up, and underlined the challenges posed by a rapidly fraying international order where power is shifting. The conference elucidated Europe’s role and positioning at a time of multipolar competition – one of JOINT’s major research assumptions – and did so from the vantage point of some of Europe’s most significant “Others”: the United States, China, Russia and Iran. Following Ms Balfour’s bird’s eye view of the challenges to and prospects for the EU as a foreign and security player, the public conference introduced the views from partners and rivals alike.

Rosa Balfour highlighted intra-EU constraints – another major research assumption of the JOINT project – to then see opportunity in new initiatives aimed at strategic autonomy, also through the integration of economic instruments into EU foreign policy at large. The EU has suffered from self-inflicted blows stemming from the socio-economic fallout of the Eurocrisis, its dithering on security engagement at its doorstep – notably in Ukraine and the Western Balkans (case studies the JOINT project focuses on), democratic backsliding, the advent of Eurosceptic populism and the refugee crisis. These factors, along with Europe’s poor handling of the covid-19 pandemic and a more fraught international environment, have made the Union more inward-looking and unable to carry the torch as a normative power. Moreover, these factors prevent Brussels from being able to speak the “language of power”, an aspiration of High Representative Josep Borrell. There are, however, opportunities embedded in the EU’s embrace of strategic autonomy. If this concept is understood in relational terms, it may allow the EU to collaborate with a diversified group of powers – ranging from allies, strategic partners to rivals – to better defend its normative and strategic interests. The EU may indeed act as a “geopolitical” actor as it more confidently embraces economic statecraft, possibly also in collaboration with NATO. There is the chance to adapt to a fluid international environment through variable and plurilateral settings on an ad-hoc basis – also by including partners such as Japan – aimed at functional goals. We are witnessing some of these trends in the EU’s moves on supply chains resilience, trade, development assistance and connectivity. These changes may however come at a price: there is a risk of politicising geo-economic tools for geopolitical, protectionist or mercantilist considerations, and possibly forgetting the very universal values the EU should stand for.

Barbara Keys contended that, in principle, the new Biden administration welcomes a more assertive Europe. The traditional liberal internationalist outlook of the US foreign policy elite is compounded by President Biden’s strong Atlanticism. In practice, however, there are inward-looking forces at work in the United States as well. The new administration is focused on healing the nation from the fallout of the pandemic, its economic fallout, racial injustices and wider socio-economic inequalities. Moreover, there’s a real possibility of the return of a Trumpian administration in four years-time. This may lead to a continuity with at least some themes of Trump’s agenda: a drive for alliance burden-sharing, especially in Europe, as the US inaugurates a new global posture review with a focus on the Indo-Pacific, and a trade agenda that does not walk in lockstep with the EU – President Biden is still enforcing steel and aluminium tariffs, after all. Finally, the very US expectations of aligning likeminded allies on values may paradoxically lead to greater tensions with Europe, as Brussels may place these on the backburner while pursuing a less confrontational posture towards China.

Interestingly, Shi Yinhong painted a very different picture when illustrating China’s view, namely one of greater alignment between the EU and the US. Shi pointed out that US-China relations have entered a downward spiral in recent years that is only set to deteriorate further because it is mutually reinforcing. And from the vantage point of authoritative Chinese voices, the EU is aligning with the US and its maritime allies – especially Japan, Australia, the UK and Canada – on a whole variety of issues: Taiwan, the East and South China Seas, Xinjiang, Hong Kong, trade, high-tech decoupling and the association of China with cyberattacks and intrusive disinformation campaigns (JOINT will explore the EU’s positioning amidst multipolar competition in the South China Sea). While continental Europeans are less confrontational compared with US maritime allies, there is momentum growing in Europe for a more adversarial posture vis-à-vis China. This is evidenced from a rather welcoming approach vis-à-vis the Biden administration leading to receptiveness towards US pressure for aligning so-called “techno-democracies” against so-called “techno-autocracies”. And while investment and win-win economic gains may function as a viable avenue for fruitful China-Europe cooperation – along with multilateralism and global governance, cooperation with Iran and on climate change – these will not reverse the competitive tide mounting in EU-China relations. Shi argued that the further deterioration of US-China relations will push the EU and China further apart, but not to the point of joining the US into a hot war.

Dmitri Trenin argued that Russia’s take on Europe feeds from its call for a more multipolar world dating back to the 1990s. These calls aimed at bringing equilibrium to world politics, but there was a general sense of feeling part of Europe. Still, Russia’s integration with the Euro-Atlantic world would never take off in the 1990s. Beneath the surface of a Western embrace of Russia, there was scarce appetite in Moscow, Washington DC and European capitals for real integration in the Euro-Atlantic community. Europe understood Russia as too big, too poor and too different to be integrated, while the United States suspected, for good reasons, that Russia would sabotage the US-led NATO from within. In fact, Russian elites would never accept US leadership, thus purpose calls for multipolarity were essentially aimed at preserving Russia’s own voice, its own nukes, its own sphere of influence in the shadow of US hegemony. In the mid-2010s, as multipolarity slowly but steadily surfaced, it dawned on Russian policymakers that its association with Europe was not friendly anymore, as events in Ukraine demonstrated. That confrontational stance would give way to a more collaborative relationship with China, especially in the past four years. These parallel steps hardly translated into Moscow playing second fiddle to Beijing, not to mention close coordination. In fact, a divergence of views on matters ranging from the counterpart’s territorial and maritime claims, to Russian arms sales to India and Vietnam persists. Russia’s quest for a new equilibrium is facilitated by the ability of Presidents Vladimir Putin and Xi Jinping to carefully manage the relationship, a view shared by Professor Shi. In short, while Russia thought itself as part of Europe, it is now far apart from Europe. What Russia and Europe can aspire to is indifferent neighbourliness: living side by side without causing (too much) trouble to one another.

Rouzbeh Parsi delved into how a significant regional power such as Iran views Europe (Iran is also one of JOINT’s case studies). According to Parsi, Tehran has drifted away from the EU’s role in global politics. The negotiations leading to the landmark Joint Comprehensive Plan of Action (JCPOA), the nuclear agreement of 2015, nurtured expectations about joining hands with Europe and, through Europe, managing Iran’s relationship with the US. Following the Trump administration’s decision to renege on the JCPOA deal and re-impose crippling sanctions, Iran has been dismayed at Europe’s inability to have its own economic relationship with Iran. The US ability to hit Europe with extraterritorial sanctions is a clear Achilles’ heel to the EU’s pursuit of strategic autonomy (although everybody else in the world, including the China and Russia, was equally incapable of getting around US sanctions). Parsi complained about the fact that the EU and many powerful member states have the habit of constantly looking over their shoulder to second-guess what the US is thinking. The inability to have its own financial institutions in place to salvage the JCPOA – and the EU seems to have stalled in pushing forward on that instrument – will reinforce Europe’s dependence on decisions made in Washington. It may be unfair to pinpoint Europe’s weakness here because even China and Russia – often lumped-up together with Iran – were affected by secondary sanctions too. But certainly Tehran expected more from the EU and major European member states. The JOINT project will study EU foreign and security policy in crisis scenarios with the aim of fulfilling the expectations towards a more joined-up and strategically autonomous Europe that can withstand the undercurrents of great power competition.