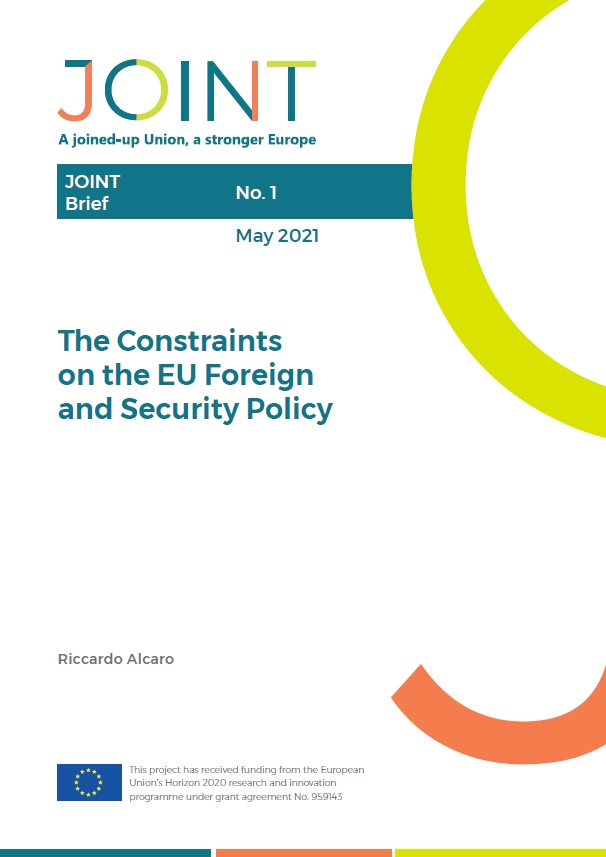 The Constraints on the EU Foreign and Security Policy

The development of a cohesive foreign and security policy has always been a tall order for the European Union.

The difficulty in sharpening the EU’s profile as a credible international security actor is usually traced to institutional matters. A main problem is the rigidity voting procedures, whereby member states retain veto power in foreign policy decisions. Another one is the low degree of defence integration, reflected in a modest capacity for force generation and projection. A third is the fragmentation of policy-making, as responsibility for the various components of the EU’s external action, spanning crisis management, development, humanitarian aid, trade, as well as the external components of migration, energy and climate policies, is scattered across different institutions and bodies, each endowed with a different degree of authority and resources.

The shortcomings of governance structures do not capture the full picture, though. Equally or arguably more important are the domestic and international contexts that shape EU leaders’ views of their countries’ interests and consequently orientate their policy preferences within the EU. Unfortunately for the Union, recently disturbing trends have emerged both at the domestic and international level.

The first constraint on a more cohesive EU foreign and security policy has its roots in domestic politics. In the mid-2010s the eurozone crisis and the surge in migrant inflows cemented the perception among sections of the population that the EU was unable to ensure prosperity and control borders, whereby a pre-existing narrative of individual and national disempowerment by unaccountable ‘globalist’ elites moved from the fringes to centre stage of the political spectrum. Extreme polarisation in politics and at times open contestation of the European order followed.

A more contested intra-EU environment had implications for EU foreign and security policy. In 2016 the Union suffered the decision by the United Kingdom to leave and shortly thereafter faced a sudden – though temporary – halt in the enlargement process in the Balkans due to the creeping nationalisation by individual countries of this EU policy.

Euroscepticism has admittedly abated since the covid outbreak. Large sections of the European public seem to be aware that greater intra-EU cooperation is necessary to exit the economic crisis caused by the extensive lockdowns and other restrictions adopted to slow down the contagion. Still, nationalist forces espousing Eurosceptic views remain a potent force across the EU, complicating the search for foreign policy compromise.

Regional fragmentation is a second main constraint on EU foreign and security policy. A distinctive feature of contemporary international politics is the increase of areas in which state authority has collapsed, is violently contested by domestic actors or is extremely limited.

These crises have a considerable destabilising potential. Local conflicts easily spill over into neighbouring states, spreading insecurity. Internally displaced persons join migrants from other countries in swelling migration flows, which in turn can create social and political disruptions in the countries of transit or destination. Illicit trafficking, including of human beings, flourishes, enriching local and transnational criminal networks. Armed militias proliferate and extremist groups find fertile ground for recruitment, training and planning of attacks both within and outside the area in which they are based. Regional players are invariably drawn into such crises, as are global actors, with the frequent result of war by proxy, increased regional instability and more acute global tensions.

The impact of regional fragmentation on Europe is considerable indeed. The collapse or severe weakening of state authority and governance in its neighbourhood (and beyond) create interconnected challenges extending into policy areas outside the traditional remit of foreign and security policy. Regional fragmentation augments the need for an integrated response, but also the difficulty in devising an effective one, as the EU’s poor record in addressing the civil conflicts in Syria and Libya painfully attests.

A third factor complicating a more cohesive EU foreign and security policy is the increase in tensions between great powers, which the covid pandemic has exacerbated.

The shift to a multipolar world is the result of the growing economic prowess of non-Western countries, most notably the soon-to-be superpower China, and the failure of the US foreign policy establishment to forge an enduring consensus on the degree and purpose of US global engagement. Washington’s ability to ensure political order in several regions of the world has consequently dwindled, whereas other powers have become more assertive: China in East and Central Asia; Russia in Eastern Europe and the Middle East; Iran and Turkey in the Middle East (to mention a few).

A direct effect of geopolitical competition has been that regimes and practices of consensual conflict resolution have become weaker insofar as the existing rules-based order is embedded in a power configuration that is being challenged and to an extent no longer exists.

All this hugely affects the EU, because the Union has historically thrived in a rules-based international order and the Europeans have relied on the United States to provide the hard power needed for that order to function, however imperfectly and irregularly. As the ability of the EU and its member states to shape multilateral rules is reduced, they are compelled to rethink their role along patterns of multipolar interaction, an exercise for which the multilaterally-minded EU is hardly well-equipped.

To be sure, none of the above is completely new. Considerations of national expediency have always obstructed intra-EU coordination, crises and conflicts in the EU’s surroundings have been a constant since the 1990s and interstate competition has never truly subsided. The novelty resides not so much in the processes themselves, as in their greater intensity and intrinsic tendency to mutually reinforce one another.

There are thus significant constraints on the development of cohesive EU foreign and security policy. However, it is worth underlining that even the combined effect of internal, regional and global factors has not resulted in a disaggregation of EU foreign policy. Even if slowly and cumbersomely, EU member states have taken steps to better their predicament.

The Union is increasingly organising its external action around the principle of strategic autonomy. The controversies that the term occasionally generates because of its supposed anti-Atlantic thrust hide the relative widespread consensus about what it entails, namely an attempt to reduce EU member states’ vulnerability to external pressure in a number of policy fields – ranging from energy to finance and investment.

Strategic autonomy is therefore related to the ability of EU member states to live by their own rules and laws, which create political room for reconciling European cooperation with national interests and ultimately reduce the corrosive effect of nationalism on EU foreign and security policy.

While strategic autonomy in security and defence remains aspirational, the strengthening of EU geoeconomics assets would nonetheless give the Union some more leeway even in crisis and conflict management. Crises and conflicts cannot after all be addressed through military means only, but also through a combination of diplomatic engagements with local and external actors and the use of instruments drawn from different policy areas (trade and investment, development, visa policy, cultural exchanges etc.).

Strategic autonomy is also about limiting the influence on the Union of other powers, for instance Russia by way of its energy supplies to the EU, China through direct investments into the Union, or the United States thanks to the extraterritoriality of its financial sanctions. Multipolar competition may thus be turned into a spur, rather than a brake, on the development of a more cohesive EU foreign and security policy.

It is no coincidence that the EU Global Strategy, the document that first popularised the term strategic autonomy, insisted extensively on the imperative to foster synergies between the foreign policies of EU institutions and member states, greater integration of instruments across external and internal policy domains, as well as working mechanisms for coordination with external players. As major institutional reforms are not in the card, flexibility, creativity and prioritisation are of the essence.

The EU is not a nation state and expectations of its foreign and security policy should not mirror those applied to nation states, especially great powers. But joining-up EU assets in terms of actors, instruments and formats of engagement on an ad hoc basis is possible even under the constraints of Europe’s current predicament. Failure to do so will invariably result in the severe weakening of EU member states’ international influence and ultimately security.