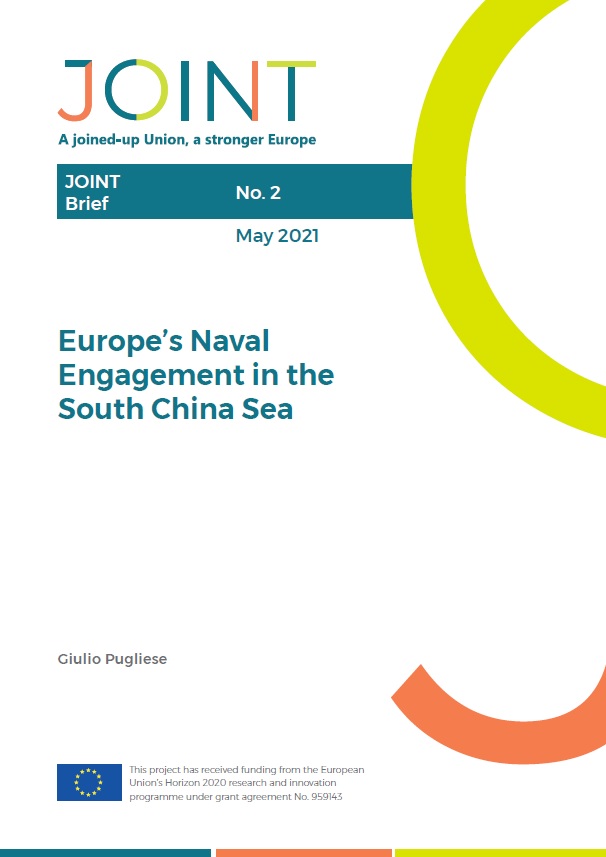 The EU’s Strategy for Cooperation in the Indo-Pacific calls for a “meaningful European naval presence in the region”. What does it mean for vested parties in the South China Sea?

On 19 April 2021, the Council of the European Union, which convenes the Foreign Affairs ministries from the EU’s 27 member states, reached a consensus in favour of an “EU Strategy for Cooperation in the Indo-Pacific”. Following Japan, Australia, India, the United States, ASEAN and three of its key member states, the EU has also endorsed the Indo-Pacific concept. It has done so in a rather comprehensive and inclusive fashion that highlights cooperation from its very title and geographic remit. According to the Council’s conclusions, the Indo-Pacific spans from the eastern coast of Africa to the Pacific Islands, a region that accounts for as much as 62 per cent of global GDP. In short, it’s a rather comprehensive “strategy” for half the world. In fact, since interests among the 27 member states vary considerably, the nine-page document reads more like lasagne – with layers of items piled up, in no particular order – rather than a strategic document.

At the same time, the document acknowledges intense, regional “geopolitical competition”, an indirect way to refer to Chinese assertiveness, tensions with its neighbours, and tense US–China relations. One of the key theatres of said competition is the South China Sea, a large body of international waters where territorial and maritime disputes among littoral states are compounded by US–China strategic rivalry. Interestingly, the Council’s document explicitly calls for a “meaningful European naval presence in the region” by expanding Maritime Domain Awareness activities from the Indian Ocean to Southeast Asia, which is code for the South China Sea. Said engagement will take place through voluntary contributions by member states and acquire an EU-wide quality by hosting military officers from other member states (if not third parties) onboard dispatched vessels. Why is the EU interested in naval presence operations in these hotly contested, far away waters?

Firstly, there are economic incentives: about 30 per cent of global trade goes through the South China Sea, meaning member states have an active interest in safeguarding sea lines of communications connecting the EU with rich Asian markets. Secondly, the EU – a supranational and intergovernmental organization comprising medium and small powers – has substantial vested interests in the preservation of a multilateral order based on widely-shared international rules. A more actively contested international order has recently witnessed a rapid redistribution of power coinciding with Chinese assertiveness and the subsequent disruptive US pushback premised on sheer power politics under the Trump administration. There’s a concrete fear that in an age of great power competition, international law will give way to the law of the jungle. For this very reason, the EU echoed the 2016 unanimous ruling by an arbitral tribunal constituted under the United Nations Convention on the Law of the Sea (UNCLOS) with its own condemnations of China’s expansive claims and militarisation of geographic features in the South China Sea. And in September 2020 – shortly before Brexit – France, Germany and the United Kingdom submitted a note verbale to the United Nations to confirm support for UNCLOS’ integrity within the context of the 2016 arbitral ruling against China.

Thus, the sending of European warships in the South China Sea is not aimed at deterring China in only the narrow military sense. The steady crescendo in so-called presence operations in support of freedom of navigation is unlikely to replicate the United States’ Freedom of Navigation Operations (FONOPs) within 12 nautical miles of disputed geographical features in the South China Sea. Instead, the aim is to buttress the consuetudinary law of the international seas to underscore free passage through the open seas while reassuring Beijing that the aim is not to contain its naval projection. After all, the defence of sea lines of communication is also a legitimate Chinese interest as much as China’s security. Much of the US–China confrontation in the South China Sea stems from the very fact that Chinese strategists are wary of US intelligence, surveillance and reconnaissance activities (i.e. there is a more decisive zero-sum security angle) and are anxious of having the People’s Liberation Army’s Navy bottled up within the so-called “first island chain” − extending from Borneo to the Philippines. In this author’s opinion, the European naval engagement, while welcome from the United States and likeminded maritime democracies such as Japan, Australia and India – with whom European member states have increased their military cooperation – will be more likely conscious of the security dilemma at play. While the Chinese government increasingly objects to European presence operations, and its military and constabulary forces do harass European vessels, Beijing is especially vocal against US activities.

Three European states, in particular, are stepping up the game in the South China Sea. France – a resident power in the Indo-Pacific with a constellation of small territories, maritime rights and roughly 1.5 million citizens scattered along the habitable features – has been the most proactive power. In fact, it already sent a carrier battle group in 2019, and recently announced the completion of a patrol of the South China Sea by a nuclear attack submarine, just as two of its warships engaged in a training mission and operational deployment through the South China Sea all the way to Japan. The United Kingdom, while not a member of the European Union anymore, has inaugurated its own tilt towards the Indo-Pacific through its Integrated Review and is replicating France’s dispatch of a carrier strike group to the region this year. These steps follow through the UK’s activities in the South China Sea from the past several years. Lastly, Germany has recently announced that a warship will sail through the South China Sea, for the first time in 20 years, to then perform core activities in the East China Sea. It’s noteworthy that the Japanese government suggested a joint naval drill in Asia to its German counterparts.

These very themes run through a newly-inaugurated EU-funded project, JOINT, which is preoccupied with understanding the EU’s role in crises and conflicts amidst a more rapidly competitive international order. The South China Sea is one of the key case studies of focus and, to that effect, at JOINT’s kick-off public conference, Renmin University professor Shi Yinhong – who sits in the Advisory Board of the EU-funded project – has seen closer alignment between the EU and the US in this regard. Still, the EU’s Strategy for Cooperation in the Indo-Pacific, which is expected to be framed in more concrete terms through a Joint Communication by the European Commission and the High Representative scheduled by September 2021, has highlighted inclusivity and cooperation. Will the EU be able to drum up support for a multilateral order in the broadest sense while avoiding the bloc mentality proper of power politics? Its engagement in the South China Sea is a good testing ground to address this question.