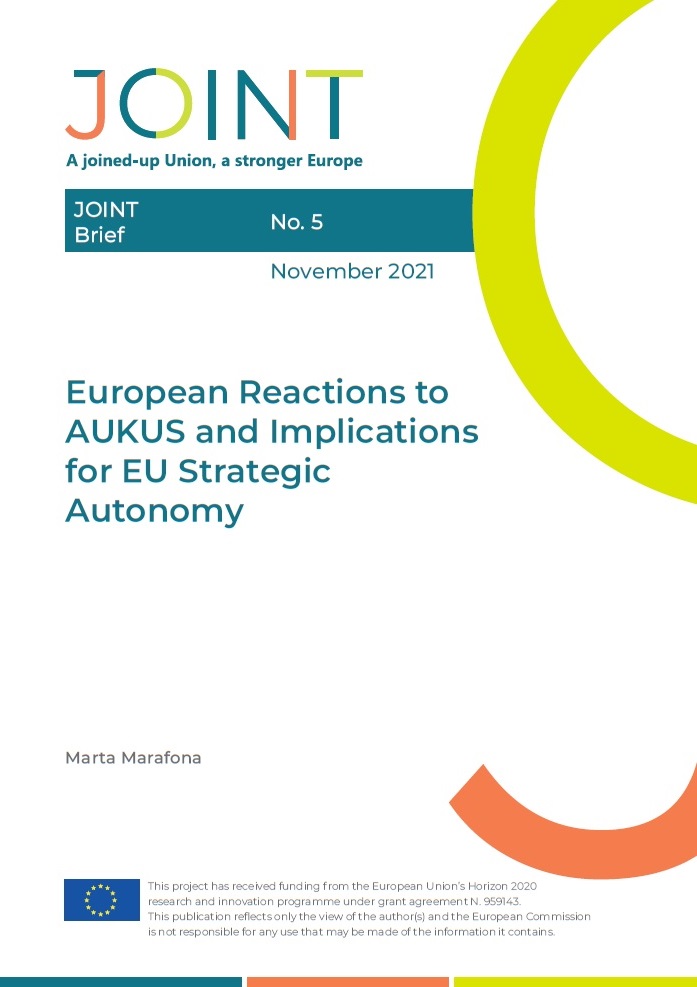 European Reactions to AUKUS and Implications for EU Strategic Autonomy

On 15 September 2021, Australia, the United Kingdom and the United States announced AUKUS, a trilateral deal aimed at intensifying security cooperation in the Indo-Pacific area ostensibly to counterbalance Chinese influence. While AUKUS foresees cooperation in a number of policy areas, its core element is the provision of US-made nuclear-powered submarines to Australia. This has given a new dimension to AUKUS, as Australia abruptly cancelled a pre-existing contract for the purchase of thirteen diesel electric-powered submarines from France, leading to a diplomatic turmoil.

The French government, which was kept in the dark about the talks over AUKUS, reprehended the United States and Australia, describing the deal as a “betrayal” and a “stab in the back”.[1] Despite the fact that the spat concerned only France, Paris was quick to frame it in broader European terms. French officials argued that the incident laid bare once more the need for the EU to acquire greater strategic autonomy and develop more advanced military capabilities. As put by President Emmanuel Macron, the EU should stop being naive about US interests, which have decisively shifted towards Asia.[2]

The European Union and its member states have responded differently to AUKUS. While some showed solidarity toward France, others were critical of its furious reaction, arguing that Paris was projecting its own preferences into the EU arena.

By and large, EU institutions stood by France, complaining that the secrecy surrounding the AUKUS negotiations was an unacceptable demonstration of a “lack of loyalty”.[3] According to European Commission President Ursula von der Leyen, the way the United States handled the AUKUS process should be seen as a warning against the EU’s excessive reliance on other countries, including its closest ally the United States. Von der Leyen later made a public appeal for a European Defence Union in her annual State of the Union address to the European Parliament.[4]

Amongst the member states that openly supported France was Portugal, which underlined the importance of EU military autonomy. Minister of Foreign Affairs Augusto Santos Silva defined Australia’s conduct as questionable and as a breach of commitment. Minister of Defence João Gomes Cravinho complained about the lack of dialogue among EU member states, as not all shared the goal of making the EU a more autonomous global player.[5] Greece signed a warship deal with France just over one week after the announcement of AUKUS. The French–Greek deal, which can be translated into a strategy to patrol the Eastern Mediterranean, was construed discursively in keeping with the French emphasis on EU strategic autonomy, with Greek Prime Minister Kyriakos Mitsotákis describing it as a “way for an autonomous and strong Europe”.

Germany has been a lukewarm supporter of EU strategic autonomy under Chancellor Angela Merkel, who has embraced the notion only insofar as it is subordinate to NATO. The presumptive next chancellor, the social-democrat Olaf Scholz, is arguably of a similar opinion, although the staunchly pro-EU Greens in his ruling coalition may want to push a bit harder on developing greater EU foreign and security policy capacity. Several German politicians maintain that Germany can mediate between the United States and France and consequently between the latter and the most Atlanticist EU member states.[6] Some German officials are nonetheless sympathetic toward “their French friends” and have expressed disappointment regarding the AUKUS signatory states.[7] The German government has remained silent, however. So has Italy, even though it often echoes France’s positions regarding European military ambitions. This may be a reflection of Prime Minister Mario Draghi’s Atlanticist orientation, or more simply that Italy did not want to be dragged into a bilateral confrontation with the United States on an issue that did not directly affect its interests.

Other EU states have indeed had mixed reactions, with Poland as a case in point. In Warsaw, AUKUS has been largely perceived as a show of relative disregard of a European ally’s interests by the rhetorically staunchly Atlanticist Administration of Joe Biden. Yet, Poland has simultaneously interpreted the security pact as positive, as it is a sign that the United States is dedicated to counterbalance China and stand up to autocracies (including Russia).[8] A few member states were not critical of AUKUS at all. Denmark drifted away from the EU’s position, recalling President Biden’s “loyalty to Europe”, whilst criticising France’s reaction. Also, the Netherlands and Sweden did not express discontent toward AUKUS, as they focused on the benefits the new EU–Australia trade deal may bring to their domestic economies.

What does this entail for European strategic autonomy? In order to analyse AUKUS implications, one must look at its wider geopolitical consequences for NATO, as well as for the EU’s approach to the Indo-Pacific.

First, one of the main reasons why AUKUS has led to a diplomatic crisis is the frustration in Paris generated by the fact that France, in spite of its military presence in the Pacific (where up to two million French nationals live), and by extension the EU itself are not seen as prominent actors in the region. This was eloquently attested by the timing of the AUKUS announcement, which coincided with the day the EU released its strategy for the Indo-Pacific.

Second, by establishing a military pact, the United States, the United Kingdom and Australia engage with a hard approach to Chinese presence in the Indo-Pacific. This strategy stands in contrast with the EU’s economic-driven softer approach, although France has been pushing to harden that. The EU, and even more so its member states, will find it increasingly hard to strike a balance between their desire to intensify economic cooperation with China – as they tried to do by agreeing on the now stalled EU-China Comprehensive Agreement on Investment – and their interest in staying close to their most important ally, the United States, which is pushing for a much tougher approach. More often than not, the EU will have to make a choice as it cannot have both ways.

Third, one should stress how the AUKUS conflict affects relations with NATO. Many EU member states argue that an autonomous EU would undermine NATO, whilst alienating the United States. The crisis then revived a key debate: should the EU step up its military game and become more autonomous from the transatlantic alliance, or instead continue with its balanced approach, while Washington carries the gun?

So, what does AUKUS mean for European strategic autonomy? To put it simply, it signals the EU it might be time to beef up its military power. The bloc may maintain a balanced approach whereby economic ties with China are strengthened; or instead follow a harder military strategy, therefore contributing to constraining Chinese influence in the Indo-Pacific. Still, if it indeed intends to become an autonomous strategic global player, perhaps AUKUS represents the wake-up call the EU was missing.

[3] Elie Perot, “The AUKUS Agreement, What Repercussions for the European Union?”, in European Issues, No. 608 (28 September 2021), https://www.robert-schuman.eu/en/european-issues/0608-the-aukus-agreement-what-repercussions-for-the-european-union.

[7] Elie Perot, “The AUKUS Agreement, What Repercussions for the European Union?”, cit.

Laying the Groundwork for Peace in a Fragmented Libya

The Italy–France Treaty is an Example of Wise Diplomacy