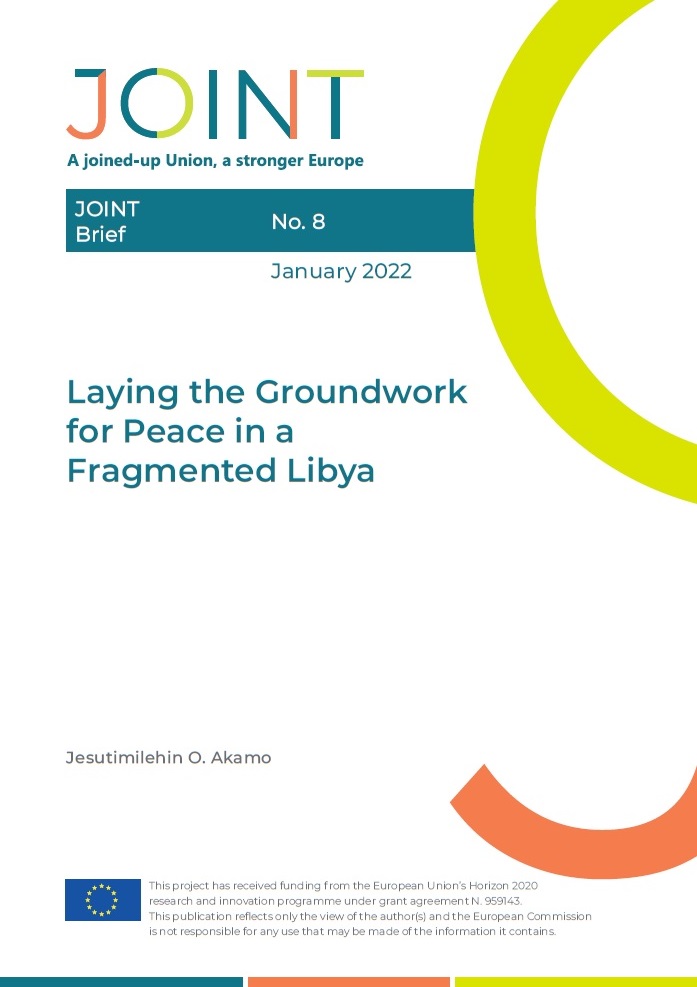 Laying the Groundwork for Peace in a Fragmented Libya

Libya is fragmented, and this fragmentation raises questions about legitimacy for whoever emerges as the winner of the presidential elections, now scheduled for early 2022. Legitimacy is one of the underlying challenges that engenders post-election conflict in many African societies. To avoid post-election conflict in Libya, stakeholders like the European Union, by way of anticipation, may need to facilitate dialogues with domestic and relevant foreign actors towards accepting the election results and the president-elect. The political intervention also includes facilitating talks with presidential candidates to ensure that their political priorities are not contrary to Libya’s peace agenda. Against this backdrop, multi-track diplomacy is a workable tool in developing a conducive terrain for peace.

The conclusions of the second Berlin Conference on 23 June 2021, a fifty-eight-point statement,[1] highlight the achievements of the process started at the first Berlin Conference of January 2020 and aimed at national reconciliation in Libya.[2] Since January 2020, the ceasefire between the warring factions of the internationally recognised government in Tripoli and its rival based in Tobruk has stood. The House of Representatives, which had opposed the Tripoli-based executive after relocating to Tobruk, has continued to support the (transitory) Government of National Unity (GNU) led by Abdul Hamid Dbeibah. The fifty-eight-point statement prioritises the success and legitimacy of the two-round presidential election, originally scheduled between December 2021 and January 2022. It establishes that the poll should occur as stated in the “Roadmap adopted by the Libyan Political Dialogue Forum (LPDF) in Tunis in November 2020, and their results need to be accepted by all”.[3] To understand the importance of the election result’s legitimacy, one must understand the nature of Libya’s socio-political fabric.

A fragmented Libya and elections

Differences and divisions are common denominators in fragmented contexts. A form of conflict between and among social and political actors, while not necessarily armed or violent, is an essential component of the very definition of fragmentation.[4] In Libya’s case, conflict (armed or otherwise) exists among tribes and tribal networks, largely a result of the strategy employed by former leader Muammar Qaddafi to keep the country united (and his rule safe).[5]

These tribes and tribal networks are examples of informal structures of kin or fictional kin bonds. After the fall of Qaddafi and the outbreak of civil war in 2014, they became alternatives to failing state institutions. Tribal networks were neither representative nor inclusive in providing some form of governance.[6] Nevertheless, they enjoyed legitimacy from their members. Any emerging central authority requires legitimacy to keep Libya less conflict-prone, and tribes and tribal networks became prominent in that regard.

It is essential to note that sub-groups make up much larger tribes. For example, the Warfalla tribe is a confederacy of 52 sub-tribes. This complexity involves that vertical and horizontal disagreements – between, sub-groups and the larger group’s leadership (vertical) as well as amongst sub-groups (horizontal) – are both possible (examples of tribes who are/were in a conflict situation against each other are shown in Table 1). These disagreements are what ultimately makes Libya as fragmented as it is today. Revenge or retaliation over a perceived wrong, including support for the Qaddafi regime, are common causes of violent confrontation. Considering this, the agreement reached by the tribes to hold an election is a huge step forward in peace terms. By extension, their acceptance of the election results and the president-elect’s political priorities are crucial for peace to take root.

A key element to supporting and sustaining peace in Libya is the president-elect’s legitimacy. Libya’s electoral commission reported 98 candidates in the presidential race as of 22 November 2021, when applications closed.[7] Dbeibah, the interim prime minister, is also in the race despite initially pledging he would not run.

Among those who command influence, Khalifa Haftar is arguably the most prominent. Haftar is the strongman of Cyrenaica and the unofficial leader of the Tobruk-based warring faction, who laid siege on the capital for over a year before being pushed back by forces sent by Turkey.[8] Haftar controls the self-styled Libyan National Army (LNA) with the support of some tribes. In particular, the armed force Haftar commands has been on the offensive against al-Zinten. Also, Tebu (integrated into Haftar’s forces) have fought against the Fajr militia, an anti-Haftar camp. At some point, Haftar forces have aligned with some in the east against others in the west. In addition, Tuareg and Toubou in southern Libya, who supported the Tripoli-based Government of National Accord (GNA, the other warring faction in the civil war; it should not to be confused with the GNU), were once part of the offensive against al-Zintan (allied to Haftar’s LNA) in the northwest.

Indeed, tribal identity and conflict in Libya cannot be separated.[9] In addition to this, recall that Libya became a proxy battleground in which foreign fighters (national armies and mercenaries) were either pro- or anti-Haftar, with interests ranging from economic and geopolitical.[10]

Herein lies the problem. What does the possibility of a General Haftar, a pro-Haftar or an anti-Haftar president-elect hold in terms of legitimacy? The Berlin process does not include any provision addressing violations of the ceasefire agreement.[11] Another structural flaw is the absence of a constitution and an electoral law, especially one that prescribes what happens if aspirants contest the election results. Against this backdrop, there is understandably widespread fear of repeating the internationally-backed but ultimately failed political processes of 2012, 2014 and 2015.[12] The successful conduct of the election and the emergence of a winner may represent the advent of another phase in Libya’s civil conflict. Therefore, international stakeholders should pay attention to the president-elect’s legitimacy.

Multi-track diplomacy, the EU and Libya

The problematic relationships between and amongst the various tribes and tribal networks and their history make multi-track diplomacy (MTD), a diplomatic approach based on the parallel pursuit of different channels, a wise option to pursue peace and reconciliation. MTD may include formal and informal channels. The Whole-of-Society Conflict Prevention and Peacebuilding (WOSCAP), an EU funded project that sought to enhance EU peacebuilding capabilities, developed the MTD toolkit, shown in Table 2.[13]

The EU used MTD in the crises in Ukraine, Georgia, Mali, and Yemen, in which it learned the importance of a long-term, proactive, pre-emptive and whole-of-society approach.[14] These elements are crucial for Libya’s peace process too. The whole-of-society method includes inclusive engagement with social actors like tribes and tribal networks. Inclusive engagement in practice means meaningful participation of tribes and tribal networks in the peace agenda, especially dialogues facilitated by the EU. Inclusive engagement is relevant for Libya, a country with a history of political exclusion under Qaddafi. As highlighted earlier, Libya is a fragile and fragmented post-war environment heading for elections with structural deficits. According to the study that produced the toolkit, the capability to act, fund, coordinate and cooperate are the measuring tools to grade the EU’s effort within the MTD context.[15]

Enhancing a multi-track diplomacy framework that anticipates the (post-)election dynamics will prove instrumental in developing a conducive terrain for peace in a fragmented Libya. Tribes hold the keys to make or mar the election and peace process. The history of the tribes, the absence of a constitution and electoral law, and tribal distribution of presidential aspirants, not to mention the sheer number of presidential candidates, suggest that a legitimacy crisis is possible. We need to pay close attention to this risk. The fifty-eight-point statement of the second Berlin Conference rightly highlights the importance of an election that is accepted by all. Hence, the following recommendations can aid the acceptability of Libya’s election results.

• Use the MTD Toolkit to its full extent. The EU can use the Track 3 dialogues to enhance domestic legitimacy. This approach will include facilitating talks between and among tribes and tribal networks. An essential element of this approach is an actor-interest mapping to estimate and leverage meeting points between the tribes and tribal networks, especially (sub)tribes with a history of confrontation. Products of the Track 3 dialogues may also be helpful to estimate essential points the president-elect could cover in his political priorities. In addition, the EU can use the Track 1 dialogue to ensure that the candidates reach agreeable terms on the president-elect’s political priorities (deal brokering). The Track 1 dialogue also includes engineering the acceptance and recognition of the president-elect by foreign actors. Agreeable terms for an inclusive power-sharing formula in selecting the president’s cabinet members may also be required.

• Institution-building. Recall that the toolkit’s approach to diplomacy for Track 3 is transformative. Policymakers and analysts from the EU should ensure that the mediation process does not eclipse the urgency to address fundamental structural gaps and institution-building. Structural gaps are conflict drivers, and conflicts exacerbate fragmentation.[16] For instance, while mediation efforts are ongoing in Libya, mitigating the impact of violence on affected communities through developmental interventions is essential. Amidst the political chaos, communities need to behold the tangible benefits of the progress made thus far that is directly associated with the absence of violent conflict. Such tangibility presents peace advocates with a reference point for peace when facilitating dialogues.

[4] Kathleen Gallagher Cunningham, “Understanding Fragmentation in Conflict and Its Impact on Prospects for Peace”, in Oslo Forum Papers, No. 6 (December 2016), https://www.hdcentre.org/?p=5875.

[5] Tribal networks here refer to the sub-groups that come together under one larger tribe (sub-sets).

[6] Al-Hamzeh Al-Shadeedi and Nancy Ezzeddine, “Libyan Tribes in the Shadows of War and Peace”, in CRU Policy Briefs, February 2019, https://www.clingendael.org/node/9929.