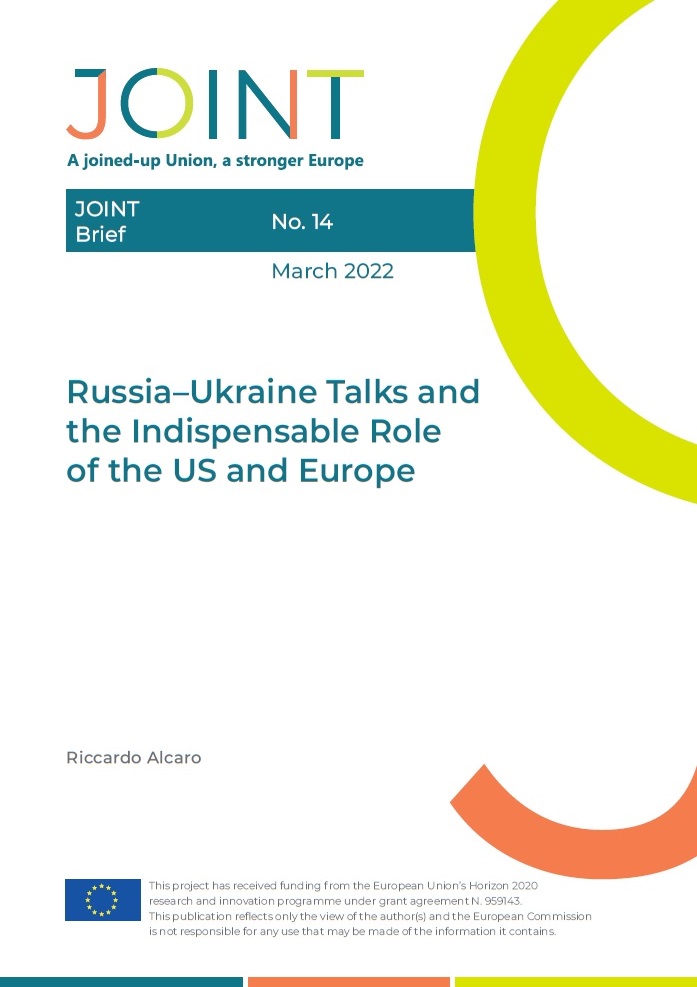 Vladimir Putin’s imperialist war of conquest in Ukraine is about to enter its fifth week. Russia’s failure to shock and awe Ukraine’s government and armed forces into submission through a poorly executed Blitzkrieg has morphed into a slow and ever more brutal three-front campaign. While Russian forces struggle to make strides in the north and east, they have been more successful in the south, where they are about to deprive Ukraine from access to the Sea of Azov.[1]

The war is causing immense harm. Civilian deaths are apparently modest, although they are rising fast.[2] Refugee flows, involving up to ten million people (over three million of which have already fled the country) are monumental in size.[3] Material damage to housing and infrastructure ranges above the hundred billion euro.[4] Military deaths are also considerable. While figures are impossible to independently verify, Russian and Ukrainian forces are estimated to have lost around 6–7,000 soldiers each. Both sides have lost enormous amounts of military equipment, especially Russia.[5]

Two variables determining the course of the war

Two main variables are going to impact the war’s trajectory. The first revolves around the ability of Russian troops to sustain the high losses in terms of casualties and equipment that Ukraine’s armed forces, thanks to Western weapon supplies, are inflicting upon them.

The second concerns the political and financial sustainability of the invasion, heavily impacted by US and European diplomatic pressure and the draconian sanctions regime on Russia adopted by the United States, the EU and their partners.[6]

Meaningful negotiations to end the war can reasonably be expected only if (and when) Ukraine’s resistance capacity breaks or the sustainability of the Russian campaign – in terms of personnel, material, financial resources and diplomatic costs – erodes to such an extent that the Kremlin is forced to contemplate outcomes that are significantly inferior to the original objective of subjugating Ukraine.[7]

For now, the Ukrainian leadership is refusing to give up. For its part, President Putin is apparently still persuaded that Ukraine’s surrender is within reach.

The knots in the Russian-Ukrainian talks

Against this backdrop, the 15-point plan which Russian and Ukrainian diplomats are reportedly discussing is a way for Ukraine to define the costs it is willing to pay to end hostilities. For the Russians, it is in all likelihood a means to buy time, regroup and restart the offensive until they are able to force President Volodymyr Zelensky to agree to conditions that are now unacceptable to him.[8]

The plan rotates around three main components: an end to the invasion, Ukraine’s neutrality and the status of the contested regions of Crimea and the two self-styled independent republics of Donetsk and Luhansk in the Donbas. A fourth element – what the Russian propaganda dubs “de-Nazification” – has been largely de-emphasised and now no longer concerns the removal of Zelensky from power but rather relatively uncontroversial measures that Kyiv should adopt to defend and promote Russian language and culture in Ukraine. The other three points, however, are extremely problematic.

Ukraine can hardly accept anything less than the full withdrawal of Russian troops from all territories where they were not present before 24 February 2022, the day the invasion started. In return, the Ukrainians are willing to forsake membership in NATO by way of a constitutional amendment, provided they get solid security guarantees and maintain military forces capable of ensuring territorial defence. Nor are they ready to give up on the prospect of EU membership one day. As for the contested territories, President Zelensky may be open to a compromise: refrain from actively demanding the full return of Crimea and the Donbas, but refusing to recognise Russia’s sovereignty over the former and the independence of the latter.[9]

Unsurprisingly, the Russians have accused the Ukrainians of delaying the talks by advancing “unrealistic” demands.[10] President Putin aims for more on all fronts: not just a neutral but also a de-militarised Ukraine (that is, with no armed forces worthy of the name), as well as territorial acquisitions extending also to those parts of the Donbas that were still under Kyiv’s control before the invasion and, most likely, the coastal area around the Sea of Azov. Moreover, the Kremlin expects some form of sanctions relief.

The Russians do not have the capacity to conquer major urban centres, let alone control large swathes of a country bigger than France and whose almost 44-million population harbours no sympathy for the invaders. However, they can still push Ukraine into prostration by way of prolonged sieges in which cities and towns are subjected to ever more indiscriminate artillery, missile and aerial bombing. Nor can the use of non-conventional weapons – including tactical nuclear warheads – be ruled out.

The hardening of the US and Europe’s position

Putin’s reluctance to ease the military pressure on Ukraine has persuaded the United States to further harden its position on Russia.[11] US warnings to China (delivered by President Joe Biden himself) that support for Russia – be it in the form of military assistance or sanctions workarounds – would have consequences are an indication of this.[12] So are the decision to have Zelensky speak at the US Congress,[13] the announced increase in weapons supplies to Ukraine, which will include armed drones and mobile air defences,[14] as well as Biden’s visit to Europe for the NATO, US–EU and G7 summits. The US president and his partners are expected to agree on further sanctions, lay out possible responses if Russia carries out unconventional attacks, and discuss countermeasures against China if indeed the latter throws its lot in with Russia.[15] Biden may also urge his European counterparts to adopt a harsher language on Russia’s alleged war crimes.

The United States and its allies in Europe want to deny Putin the victory he still craves. Yet, military assistance to Ukraine and economic pressure on Russia may not be enough to dissuade him from escalating the conflict. This in turn carries the risk of NATO getting directly involved, either because Russia hits NATO targets (for instance, weapons shipments to Ukraine) or because the systematic destruction of Ukrainian cities generate irresistible pressure on allied leaders to intervene.

The role of the US and Europe in the talks

In the face of such risks of escalation, mediation attempts are welcome.[16] Turkey and Israel have been active in this regard and Ukraine has also called on China to step in.[17] While China could play a significant role given that Moscow would be hard pressed to ignore Beijing altogether, these diplomatic endeavours can at best freeze the conflict, not solve it. In truth, there is no prospect for a durable peace unless the United States and Europe join the table.

The United States and European are anything but neutral in the conflict. Not only do they support Ukraine, but they are central to unblocking the negotiations.

First, only the United States and NATO can restore the balance of deterrence, threatening Russia with retaliation if it keeps indulging in its policy of intimidation or contemplates the use of unconventional weapons.

Second, only the United States and its allies can provide Ukraine with security guarantees alternative to NATO membership. Such guarantees may take different forms, including continuous military supplies to Ukraine’s armed forces as well as training and joint exercises with NATO countries. Russia could – should, actually – be invited to re-join the dialogue with the United States and NATO on arms control, deployments of conventional and strategic forces, transparency over ballistic missile defence systems and military exercises.

Third, only the United States and the EU have authority over sanctions. Russia cannot expect sanctions to be lifted unless it agrees to withdraw all its forces and take full responsibility for the war – a rather implausible scenario. However, some form of sanctions relief is appealing to Russia and can incentivise it to make concessions.

Clearly the Biden administration deems that the time is not ripe for inserting itself into Russian-Ukrainian diplomacy. Given Putin’s extreme reluctance to step back, moving cautiously is wise. However, ruling out entirely the option of entering negotiations is not. The US and European governments had best assess how to leverage their considerable influence over the talks sooner rather than later.

Their goal should be to end the war, ensure Ukraine’s security and stabilise the antagonism with Russia. Aiming for maximalist objectives – regime change in Moscow – may end up prolonging the war, ostracise non-Western countries that are unwilling to break with Russia and, most importantly, utterly fail. Sanctions have hardly succeeded in bringing down regimes, as the cases of Cuba, Iran, Iraq and Venezuela attest.

The war in Ukraine is a catastrophic event that presents more risks than solutions. However, one thing stands firm: US and European involvement is a necessary condition for the establishment of a durable peace.

[9] Ukrainian Presidency, Ukraine Must Have a Collective Security Agreement with All Its Neighbors with the Participation of the World’s Leading Powers – President, 8 March 2022, https://www.president.gov.ua/en/news/ukrayina-povinna-mati-kolektivnij-dogovir-bezpeki-zi-vsima-s-73433.

[13] Dan Balz, “Zelensky Puts Biden on the Spot with His Emotional Speech to Congress”, in The Washington Post, 16 March 2022, https://www.washingtonpost.com/politics/2022/03/16/balz-ukraine-zelensky-speech-biden.

The EU Strategic Compass: A Blueprint for a European Defensive and Securitisation Policy