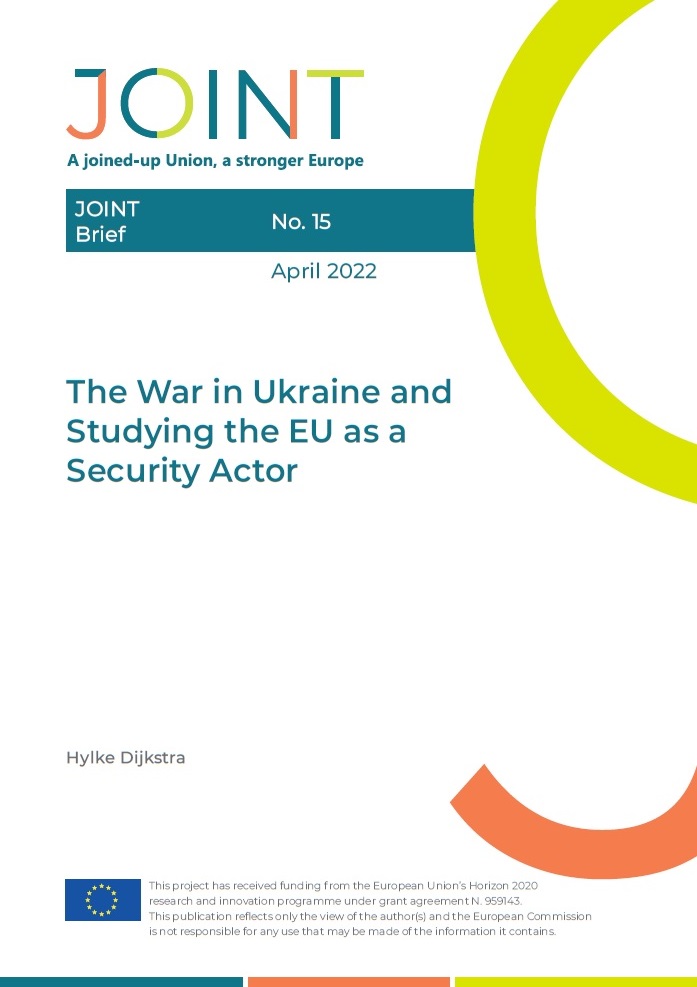 The Russian invasion of Ukraine has resulted in the most serious conflict on the European continent since the Balkan wars of the 1990s, if not since World War II. The amount of military and civilian casualties, displaced persons and material destruction after two months of war is astonishing. Unlike the Balkan wars, the direct involvement of a great power has raised questions that have been almost unthinkable during the post-Cold War years, of open NATO-Russia warfare and the potential use of tactical nuclear weapons.

There has been considerable analysis of the war so far, including of the resolve and bravery of Ukrainian soldiers, the sloppy military planning by the Russian aggressor, and the responses by the United States, NATO, Europe, Turkey, China and many others. Findings from the JOINT research project, which seeks to understand EU foreign and security policy in a complex and contested world, help us understand the response of the European Union. For that purpose, I will zoom in on what the war means for the EU as a security actor and how we should study its role.

One of the important challenges to the EU as a security actor over the last decade has been the changing domestic and international context in which policies need to be formulated and implemented.[1] Three stand out. First, increased intra-EU contestation, which has been particularly prominent since the economic and financial crisis, has also impacted on EU foreign and security policy.[2] Eurosceptic parties and groups openly question the need for the EU and its foreign and security policies. But governments also increasingly resort to vetoes and blockages, thereby making it difficult for the EU to effectively pursue security objectives.

A second challenge has been the increasing fragmentation of regions all over the European neighbourhood and beyond.[3] While conflict response and crisis management were never easy to begin with, the job of the EU has become much harder. Conflicts, such as those in Libya and Syria, are not just protracted but also include a multitude of actors and parties requiring a truly integrated, and therefore extremely difficult to execute, approach by the EU.

Finally, competitive multipolarity poses a significant challenge to the EU as a security actor.[4] While the EU previously normally had the full backing of international institutions and other states in conflict countries, it is currently competing with other powers espousing different views of order, who may also act through state-sponsored non-state actors, such as the Kremlin-backed Wagner group, to frustrate the EU’s objectives.

To what extent does the above-mentioned context in which EU foreign and security policy is formulated and implemented change due to the war in Ukraine? The evidence so far is mixed.[5]

As a starting point, the EU and its member states have shown considerable consensus and resolve in responding to the war in Ukraine. There surely have been differences between the member states. Germany has been more reluctant than Poland and the Baltic states to send heavy weaponry in support of Ukraine. And Hungary has remained deviant. But this has not prevented the EU to put together ambitious sanctions packages, which has clearly gone beyond previous red lines (halting the construction of Nord Stream 2, freezing assets held by the Russian Central Bank, cutting off most Russian banks from the SWIFT system, curtailing imports of coal, severely limiting trade in key technologies, sanctions on President Vladimir Putin and his entourage), and keeping a strong degree of unity.

What is more, the war in Ukraine has put many Eurosceptics on the defensive. The split between Poland and Hungary leaves Hungary’s self-styled illiberal Prime Minister Viktor Orbán further isolated. French President Emmanuel Macron has scored points against his Eurosceptic and nationalist opponent, Marine Le Pen, for her connections with the Kremlin and for previously accepting Russian loans. The question is, of course, how long this new-found unity in the EU will last, but for the moment the war in Ukraine is concentrating minds.

With regard to the fragmentation of regions, the war in Ukraine also raises questions and presents somewhat of a paradox. The war will likely cause further fragmentation in Ukraine itself but may also affect other parts of the European neighbourhood. Areas where the EU has invested considerably in peacebuilding such as Bosnia and Mali look increasingly fragile. Furthermore, it seems that the toolkit that the EU has been developing to address fragmentation through the integrated approach to crises and conflicts seems at odds with the collective defence tools that the war in Ukraine demands. Indeed, the EU and especially its member states currently face hard choices about the type of capabilities that need to be acquired for their security policies. With Ukraine in mind, the odds are in favour of hard power military capabilities, whereas the tools required for the integrated approach, the resilience paradigm, and the instruments to deal with hybrid threats are lower on the priority list.

Finally, it seems clear that multipolar competition in crisis regions is here to stay. At the same time, we still have to see in which direction it develops. The Russian aggression in Ukraine clearly does not bode well not just for Europe[6] but for many other conflict areas, where Russia may also actively try to undermine the international rules-based global order. It may withhold United Nations Security Council support for UN peacekeeping missions or simply encourage local spoilers to create mayhem. On the other hand, the war in Ukraine has also put the limitations of Russia on display for all to see. Moscow’s severe military and economic weakening will most likely decrease its leverage across the globe.

The war in Ukraine will thus be a game changer for EU security policy, because the context in which policies need to be formulated and implemented has so drastically changed. What is also important here, in thinking about the EU as a security actor, is the realignment between Europe, the United States, and the renewed primacy of NATO over European security questions.

Much of the EU’s development in the field of foreign and security policy since the 1990s has been against the background of carving out an autonomous position in relationship to the United States. But the current context leaves less room for the EU as a full-fledged security actor. To be sure, European countries finally seem to have woken up to the need for more defence spending. There is a new Strategic Compass and initiatives such as the Permanent Structured Cooperation continue. But any serious discussion around strategic autonomy has (at least temporarily) stalled, because the European engagement is moving along with the United States and within the context of NATO.


[1] Riccardo Alcaro, “The Constraints on the EU Foreign and Security Policy”, in JOINT Briefs, No. 1 (May 2021), https://www.jointproject.eu/?p=180; see also Riccardo Alcaro, Pol Bargués and Hylke Dijkstra, “A Joined-Up Union, a Stronger Europe. A Conceptual Framework to Investigate EU Foreign and Security Policy in a Complex and Contested World”, in JOINT Research Papers, No. 8 (March 2022), https://www.jointproject.eu/?p=969.

[2] Marianna Lovato, “The Internal Contestation of EU Foreign and Security Policy: A Literature Review of the Implications of Intra-EU Contestation on Crises and Conflicts”, in JOINT Research Papers, No. 1 (September 2021), https://www.jointproject.eu/?p=516.

The EU Strategic Compass: A Blueprint for a European Defensive and Securitisation Policy