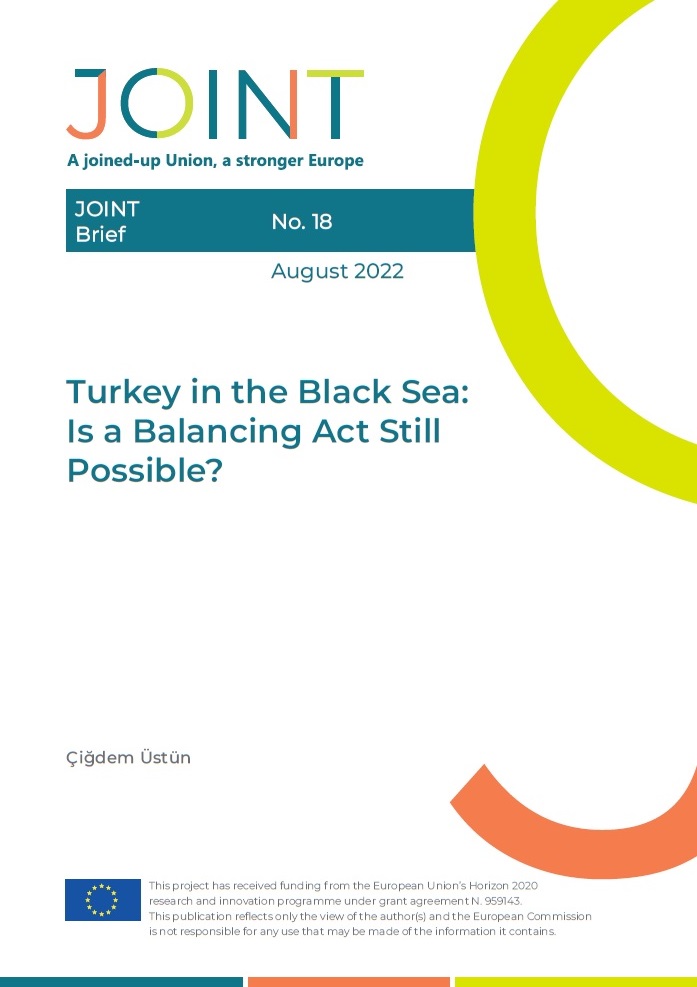 Associate Professor in the International Relations Department at Nişantaşı University, Istanbul, and Secretary General of the Centre for Economics and Foreign Policy Studies (EDAM).

Turkey has placed efforts towards establishing amicable relations with Russia while being a part of the Western alliance.

Just after the start of the Russia-Ukraine war, Turkey’s position in the region and the possible closure of the Bosporus and Dardanelles Straits became one of the main debated issues. According to the 1936 Montreux Convention,[1] which regulates maritime traffic through the Black Sea, Turkey has the right to prevent warships crossing the Straits, giving Turkey considerable power in the region.

According to the Convention, Turkey must guarantee freedom of passage for all civilian and commercial vessels during peace time. However, in war time, there are several articles regulating the passage of commercial and military vessels depending on Turkey’s position in the war, i.e., whether it is a belligerent country or not, and whether it considers itself under threat or not.

In war time, therefore, different rules apply. Aircraft carriers, whether belonging to riparian states or not, can in no way pass through the Straits; only submarines belonging to riparian states can pass through the Straits, for the purpose of re-joining their base in the Black Sea for the first time after their construction or purchase, or for the purpose of repair in dockyards outside the Black Sea. The total number and maximum aggregate tonnage of all foreign naval forces which may be in course of passage through the Straits are limited to 9 and 15,000 tons respectively. Since modern warships are heavy, the number of ships that are allowed to pass decreases. Maximum aggregate tonnage which non-riparian navies may have in the Black Sea is 45,000 tons and the maximum aggregate tonnage of the vessels of war that one non-riparian state may have in the Black Sea is 30,000 tons.[2]

There are specifically three articles (Articles 19, 20 and 21) on the control of the Straits in times of war, and in the recent case concerning Ukraine Article 19 became the most relevant, after the Turkish Foreign Ministry called Russia’s invasion of Ukraine “a war”. The Convention states that warships of belligerent states can pass through the Straits if the belligerent state is exercising collective defence obligations or warships are returning to their bases. Articles 20 and 21 set the rules if Turkey is a party to the war or if there is a threat against Turkey.

Turkey is a NATO country that follows a distinct policy in the region. Traditionally, Turkish foreign policy has been based on the principle of non-exclusion of Russia in the Black Sea while continuing its transatlantic ties. In the last decade, Turkey’s relations with Russia in the security and defence fields have scaled up, especially after the purchase of the S-400 air defence system from Russia in 2019 and Turkey’s refusal to join the EU and the US in adopting sanctions, both in 2014 and 2022, in retaliation of Russia’s invasion of Ukraine.

These developments have left open the door for diplomacy with Russia, but the continuation of economic and trade relations in spite of Russia’s invasion of Ukraine since 2014 has raised questions over Turkey’s strategic alliance with transatlantic partners. It has been argued that “[Turkey] is seeking to distribute geopolitical risk among its trade partners in the West, Middle East, and Eurasia by not joining western sanctions against Russia”,[3] especially in this particular moment in which the country is facing serious economic problems. On the other hand, Turkey clearly continues to support Ukraine not just politically but also militarily through the sales of the Bayraktar drones, which reportedly have “changed the nature of warfare”.[4] Haluk Bayraktar, the CEO of Baykar, the producer of these drones, has stated that “We have not delivered or supplied them [Russia] with anything and we will never do such a thing. We support Ukraine, we support its sovereignty, we support its resistance for its independence.”[5] Among other reasons, this shows that it would be a mistake to assume that there has been a complete shift in Turkish foreign policy in which Russia can be considered as a strategic ally.

Turkey has also been drawn into the dispute over Russia’s blockade of Ukrainian ports, which has led to severe shortages of wheat, corn and sunflower oil in international markets. Russia has been accused of using civilian ships “to weaponize commercial trade by illegally blockading the Odesa and Chornomorsk harbors, [and] profiting from the sale of stolen Ukrainian grain”.[6] In July 2022, a ship named Zhibek Zoly, allegedly carrying grain stolen from Ukrainian farmers, created a diplomatic row and dispute not only between Ukraine and Russia but also between Ukraine and Turkey, since the latter failed to stop the ship and return the grain (Turkish Foreign Minister Mevlüt Çavuşoğlu announced that there was no Ukrainian grain found in the disputed ship). Still, after this event the establishment of a safe corridor for wheat export climbed to the top of the diplomatic agenda in Ankara.

Russia and Ukraine produce one third of the global wheat supply, while Ukraine’s share alone is 9 per cent, according to the Food and Agriculture Organisation (FAO), a UN agency.[7] Wheat and corn supplies have been disrupted due to the war since February, creating a serious food crisis and a human security problem globally. In facilitating the deal allowing Ukrainian grain to be exported, Turkey has proved that its policy of non-alignment on the sanctions issue has borne results, as Russia has agreed to entrust Ankara (and the UN) with the task of ensuring that the agreement is implemented.

This crisis has once more reminded us that we are all living in a world in which security cannot be defined only in narrow, hard security terms. Thus, Turkey’s role in the Black Sea region and the importance of the Montreux Convention are not only related to the passage of war ships, submarines, and limitations on tonnages, but also related to merchant ships in war times. Article 4 of the Convention states that “In time of war, Turkey not being belligerent, merchant vessels, under any flag or with any kind of cargo, shall enjoy freedom of transit and navigation in the Straits”,[8] while Articles 5 and 6 limit merchant vessels transit and passage in the case of Turkey being a belligerent or considering itself to be threatened. These three specific articles are crucial for Turkey and the whole region since the civilian transits and passages are guaranteed by an international agreement, but also because Turkey’s position in a possible conflict is again of the utmost importance.

In the Ukraine case, Turkey’s ability to keep the diplomatic channels open, working together with the UN on the plan “to unblock the exports of Ukrainian grain amid the war and to allow Russia to export grain and fertilizers[9] demonstrates the potential of Turkey for contributing to security not only in terms of narrow definitions but also wider ones including non-military human security. Of course, no one can be sure of the sustainability of these agreements and we should all be aware of the fragility of the region, also in light of Russia’s recent missile strike on Odesa.

Yet, all these developments in the diplomatic arena show that there is still room for Turkey to play a balancing act, continue its traditional role as a regional player with closer links with its western partners. Lately, Turkey’s foreign policy choices have been questioned. But its condemnation of Russian aggression, use of the Montreux Convention to block warships, and willingness to play the role of facilitator in the diplomatic missions prove once again that Turkey is not only a regional power capable of leveraging an important international agreement, the Montreux Convention, to shape regional conflicts, but is also a NATO ally which has the potential to contribute to security broadly defined, from traditional to energy and food security.

[2] Website of the Turkish Ministry of Foreign Affairs: Implementation of the Montreux Convention, https://www.mfa.gov.tr/implementation-of-the-montreux-convention.en.mfa.

[4] Stephen Witt, “The Turkish Drone that Changed the Nature of Warfare”, in The New Yorker, 9 May 2022, https://www.newyorker.com/magazine/2022/05/16/the-turkish-drone-that-changed-the-nature-of-warfare.

[6] Yörük Işık, “Russia Is Violating the Spirit of Montreux by Using Civilian Ships for War”, in MEI Articles, 18 May 2022, https://www.mei.edu/publications/russia-violating-spirit-montreux-using-civilian-ships-war.