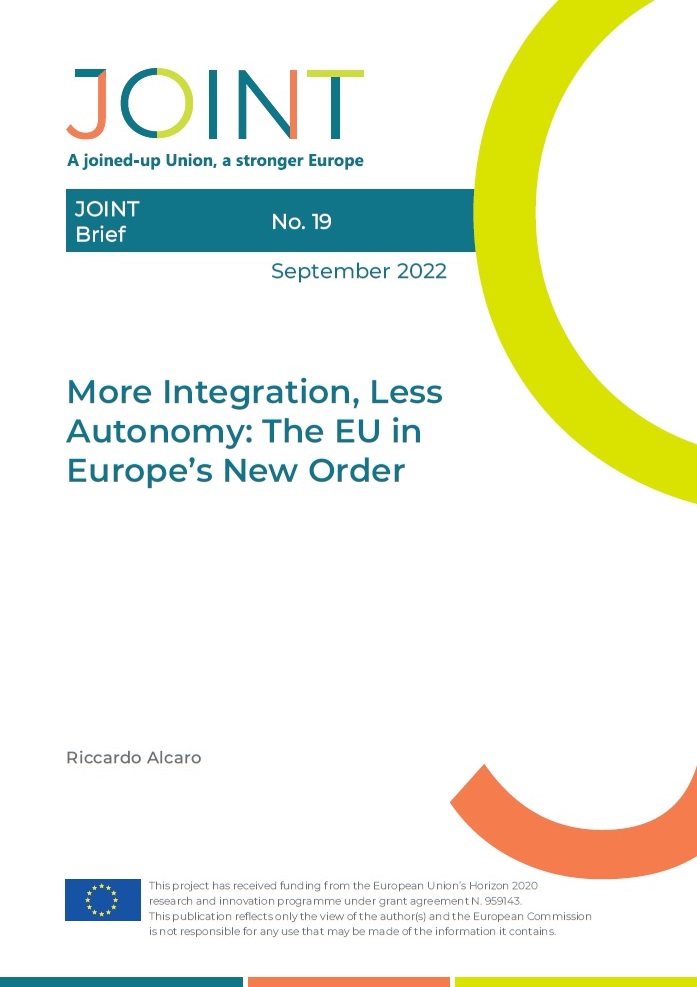 Russia’s invasion of Ukraine has not just shattered what was left of Europe’s post-Cold War order. It has also defined the broad contours of Europe’s future order and consequently of the kind of peace such an order will be able to sustain.

The war has no foregone conclusion. It may result in Ukraine successfully pushing Russian troops out of its territory or in Russia consolidating its conquest of the whole of Donbass and the area between it and Crimea. Yet, it could also develop into a frozen conflict, characterised by a protracted military stalemate.

Whatever the outcome, Europe’s relations with Russia will remain deeply adversarial. The NATO-Russia border will be much more militarised than today, running uninterrupted from Finland to the Black Sea, with a Western-armed Ukraine in the middle. The EU’s approach to Russia will continue to be geared towards financial pressure and diplomatic isolation, while energy ties will be reduced to the bare minimum or eliminated altogether. US-Russia relations will be confrontational, with perhaps minimal interaction to keep in place the residual nuclear arms reduction treaty, the 2010 New Start (in force until 2026), but no dialogue on further measures.

In this highly antagonistic context, peace will not be the result of a collective effort at conflict management and resolution through institutions, rules-based regimes and accepted practices, as seemed possible for a time in the years following the dissolution of the Soviet bloc. Instead, peace will be the default outcome of a military balance, once again underpinned by nuclear deterrence. The European order of tomorrow – actually, of today – carries a deep resemblance to the European order of the past. Europe’s peace is once again the result of a cold war.

Europe’s rediscovered dependence on the US

A main implication of a Cold War-like curtain descending on Europe is that the project to turn the EU into a more autonomous international player will be harder to achieve. This is a consequence of the renewed existential relevance for most EU member states of the security guarantees extended by the US through NATO as well as bilaterally.

In addition, the need for the EU to reconfigure its energy supply chains away from Russia will make EU countries more dependent on imports from the US itself as well as other energy producing countries with strong ties with Washington, such as Saudi Arabia, Qatar and the United Arab Emirates, and even Egypt and Israel.

More broadly speaking, the war has widened pre-existing gaps between US allies and rivals, including China. An effect of this binary logic will be that EU countries will have a greater incentive to side with the US than before, as the costs of nonalignment will increase. Seeking a separate course of action towards countries such as China or Iran – a prospect that certain EU member states have looked at favourably for years – is likely to deliver fewer returns and involve higher costs.

A shift of power within the EU

The effect of increased binary competition between US allies and rivals will be felt also within the EU, where the war is bringing about a reconfiguration in the balance of power.

With the exception of Hungary, EU member states in Central and Eastern Europe have coalesced around the imperative of countering Russia’s aggression, which is shared also by a Nordic group destined to develop a more homogeneous strategic outlook following Finland and Sweden’s accession to NATO. The North-East axis has also given post-Brexit UK a way to re-insert itself into the European chessboard as a major actor.

The intra-EU power shift implies that EU foreign policy can hardly evolve in a direction that the North-East axis views as potentially jeopardising its relationship with the US. The US itself will be keener to back the North-East-UK coalition as that will more often than not provide it with greater influence in Europe than catering to German or French desires.

To be sure, this does not mean that the EU will cease integrating. On the contrary, the competitive logic of the old-new European order is compatible with EU integration moving forward.

The Ukraine war has reduced intra-EU divisions on migration and energy matters. It has also created a demand for more rationalisation of military spending and greater fiscal solidarity (likely through another shot at selective debt mutualisation) to face the economic consequences of the war.

However, more integration will not necessarily serve the purpose of making the EU an autonomous foreign policy actor but of turning it into a more efficient instrument for organising continental relations. Military integration will not be sufficient to protect Europe but enough to increase European contributions to NATO. Selective debt mutualisation will help address the costs of the war as well as finance the reconstruction of Ukraine and new enlargement rounds so that Europe can be more stable politically and economically – but still dependent on US security guarantees.

A stronger Europe will not automatically be a more autonomous EU. In fact, a more integrated EU will be the outcome of Europe’s increased dependence on the US and a function of Europe’s more antagonistic order.

Three variables that may change the future

The scenario sketched above is realistic but not a given. There are a number of variables that can shape a different future.

The first is Russia’s domestic evolution. There is no credible evidence that President Vladimir Putin’s hold on power is imperilled nor that his successor may be willing or able to bring about a 180-degree change to Russia’s foreign policy stance. However, wars have the ability to re-shape domestic contexts to such an extent that what seems an academic hypothesis one day may become a real possibility the next. It would be unwise to discard the possibility that Russia’s foreign policy posture may change (and there is also the remote possibility of the Russian state’s collapse as a consequence of military defeat), although it would be foolish to predicate one’s own policy on that. The end or easing of the antagonism with Russia would again re-create the chance for establishing a continental order on rules and cooperation.

The EU’s evolution is the second variable. The Union could fail to generate the necessary resources to stabilise Ukraine and sustain further enlargement rounds. In fact, EU integration may be halted altogether if the intra-EU power shift generates a backlash against the EU in Italy, France or even Germany. Diminishing intra-EU solidarity would make sustaining the antagonism with Russia harder. It would also negatively affect the prospect of EU membership of Ukraine, Moldova and the Balkan states that would become more exposed to Russia’s policies of co-optation, intimidation and aggression. Europe’s order would consequently become more volatile.

Finally, the scenario sketched above assumes that the US will remain as committed to Europe as it has been under Joe Biden. Europe’s old-new order can only be sustainable under the condition of a friendly US administration. If Donald Trump, an avowed sceptic of the transatlantic relationship and an open critic of European integration, or someone with a similar foreign policy outlook were to become US president in 2025, the EU would once again find itself exposed to the risk of fracturing. The EU countries that most depend on US guarantees would be hard-pressed to contribute to an EU integration process that the US would look upon with suspicion. A less integrated EU could thus be the price for the US’s lingering commitment to the protection of Europe.

Thirty years after the end of the Soviet Union, Putin’s war of conquest in Ukraine has Europe once again mired in a deeply antagonistic order, sustained by the military balance between NATO and Russia. While US security guarantees are vital for the territorial protection of European states closest to Russia, EU countries are incentivised to integrate further to face the economic consequences of the war, fund Ukraine’s reconstruction, sustain the enlargement process and manage antagonism with Moscow. A stronger EU may indeed be one of the unintended consequences of the war. Yet, even if more integrated, the EU will remain dependent, arguably more dependent, on the US, whereby Europe’s order will be enabled by EU structures but guaranteed by US weapons, in much of the same fashion as in the past.

This outcome is not a given. Russia’s domestic evolution may eventually result in a less adversarial foreign policy stance. More ominously, the EU may fail to generate the necessary cohesion to sustain antagonism with Russia and the US may decrease its commitment to Europe under future administrations. The Cold War order in Europe was notoriously antagonistic but – eventually – stable. Today, there is no guarantee that Europe’s order will evolve along the same pattern.