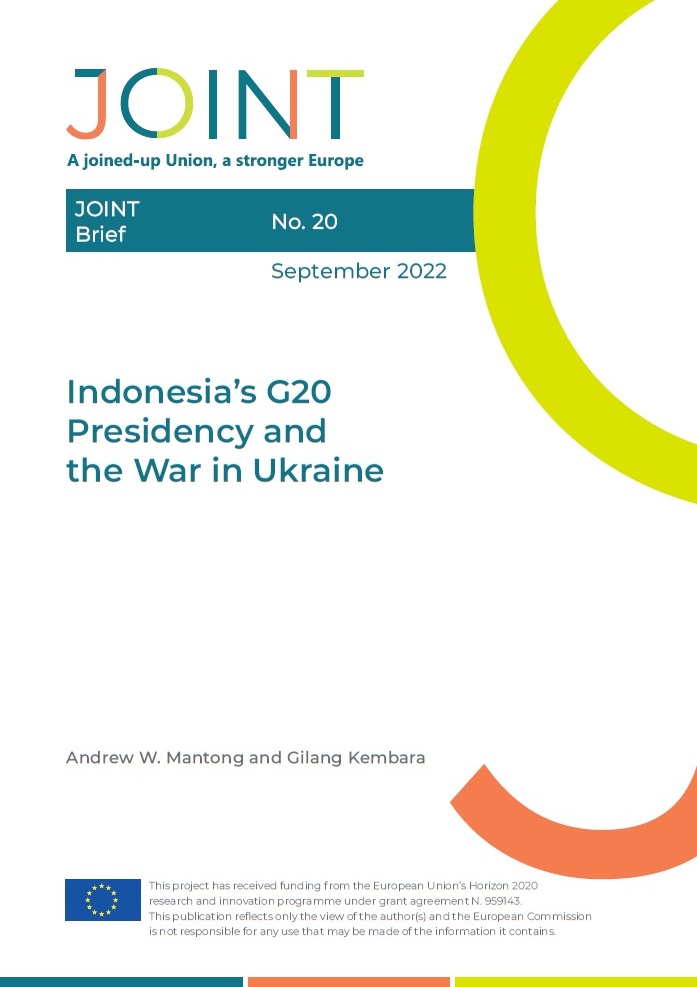 At the end of June 2022, Indonesia’s President Joko Widodo (Jokowi) conducted a series of trips overseas. It was a week-long visit to Germany, Ukraine, Russia, ending in the United Arab Emirates. Jokowi’s visit to Germany corresponded with the G7 Summit, which often hosts the G20 Chairman. After the summit, President Jokowi visited Kyiv to meet with President Volodymyr Zelensky.

Jokowi was the first head of state from Asia to ever visit Ukraine. His European journey culminated in Moscow where he met with President Vladimir Putin. In both Ukraine and Russia, Jokowi highlighted how the conflict exacerbated the food and energy crisis, and sought ways on how to abate those issues.

Such act was also special for the president himself. Foreign policy has hardly been President Jokowi’s cup of tea after two successive administrations. Although he began his first term by coining a vision of a “Global Maritime Fulcrum”,[1] which brought new attention to how Jakarta may reorient its geostrategic outlook, Jokowi has generally been an inward-looking president.

The vision has been more nuanced with his dream of making a more integrated market economy in Indonesia, where price disparity between well- and less-connected areas in the archipelago disappears and infrastructure are built to stimulate faster and decentralised economic growth. Jokowi’s main economic priority, particularly in his second term, has been to expand and improve upon the quality of Indonesia’s human resources, by focusing on the digital economy, high-tech auto manufacturing (electric vehicles, batteries, etc.), and the creative industry (including tourism). He believes that after investing in much needed infrastructure, it is now time to unleash the potential of the Indonesian workforce to be able to compete at a global scale, and to propel the economy of the nation.

However, focuses on economics can no longer keep the president away from major international security issues. The trip illustrates such urgency for his administration, as it is for the Indonesian national security strategy.

Despite having no tradition in publishing an explicit national security strategy, President Jokowi’s Europe trip highlights some important pillars of Indonesian foreign policy.

First, foreign policy is mostly economic diplomacy for President Jokowi. Indonesia’s strategic outlook has been long characterised by desires to address embedded vulnerabilities that come with a territory consisting of thousands of islands separated by seas and crossed by international sea lanes.[2] For the Jokowi administration Indonesia is thriving thanks to its demographic bonus, as hinted by numerous speeches done by cabinet members. Jokowi believes that Indonesia must fully grasp the benefits of its current demographic composition before the current generation gets older and turns into a liability in the future. Undisrupted economic growth must be fuelled by investments and the development of old and new markets, for the benefit of Indonesian industries, goods and services. Thus, international and regional stability is a precondition for advancing his economic agenda.

The fact that the president took off on a jet flying to Europe and travelled by train to Ukraine describes how urgent the situation is today even for Indonesia. The Indonesian government worries that, as COVID-19 and US–China competition, the war in Ukraine has shifted multiple global agendas from economics to security, at a time when Southeast Asia suffers from the surge of commodity prices and risks of food crisis.

Second, there is a path-dependent feature of Indonesia’s position to an international crisis like this. Any government in Indonesia is constrained by a doctrine of “free” and “active” foreign policy. The doctrine involves that by being “free”, Indonesia does not enter formal alliances with any country. Any diplomatic action is framed by what current Foreign Minister says as “not pointing fingers”, while foreign policy officials are expected to conduct “active” efforts based on national interest at realising world peace and stability.

While being “free” resembles a political parameter about who to turn to and how, being “active” is subject to national mobilisation and material capabilities. Instead of bilateral measures, multilateral and regional frameworks are the best channel for Indonesian active foreign policy, to address crises because of its relatively scarce military and economic power. Jokowi’s trip superficially looked bilateral in nature, to the extent that people start wondering if the president was interested to become a mediator between Ukraine and Russia. However, he departed from the starting point of the normative framework of the United Nations Global Crisis Response Group and the current mission of Indonesian presidency of G20.

Multilateral arrangements compensate Indonesia’s minimal security capabilities while prioritising economic growth. Indonesia has thus always needed support from, and partnerships with, great powers for its national interests in security, economic, maritime, technology or environmental matters. However, to ensure impartiality, Jakarta engages in bilateral ties with great powers by keeping equal balance with other great powers.[3] A significant portion of Jakarta’s security policy, thus, goes to managing threats and challenges through multilateral frameworks based on ASEAN centrality.

Such circumstances create a habit of going through multilateral frameworks to exert influence on global and regional affairs. Indonesia’s position within the G20 fits its projected image of a middle power country.

To exert this kind of influence Indonesia tries to be the voice of developing countries in setting its G20 presidency agenda. With over two years into the COVID-19 pandemic, Indonesia feels that there is a growing divide between the rich countries and the emerging economies. This explains why Indonesia strives for a path of inclusivity, where no country is left behind in the pursuit of recovery, be it economic or health.

With the G20, Indonesia aims to build a more responsive and inclusive global healthcare system, where it could coordinate health funds and capacity to assist countries that lack any of those. It also looks into matters of increasing efficiency in governance through implementing digital transformation. By allowing all elements of society to be connected digitally, governments could respond to their needs more rapidly, hence increasing efficiency. Last but not least, is to ensure that future generations will still have a world to look after. Therefore, Indonesia pushes for a better approach to energy transition that would allow all nations to be involved, through the use of sustainable fundings, and easier access to technology.

These objectives require a clear economic focus. The war in Ukraine may now disrupt the agenda, as it has impacted global food supplies and commodity prices, something that goes directly into the desk of the current Indonesian president.

A meaning of Europe and for Europe

Since Russia trespassed into Ukrainian territory, strategic communities in Indonesia and elsewhere in Southeast Asia have been discussing about the possibility of China being inspired by Russia’s action to seize Taiwan through military means. Should it happen, Indonesia worries that its territory, its surrounding water, and its neighbours will be used as theatre of war. At the same time, the Indonesian government worries that it is going to be too late for Indonesia to accelerate growth at the desired level since a conflict between China and Taiwan may involve blockage and disruption of supplies.

These concerns reflect Indonesia’s reliance on multilateral and regional processes. Indonesia believes that its growing profile as a middle power is accommodated and reflected by its status as a G20 member, complementing its primus inter pares role in ASEAN. At the heart of engagement in both forums is a belief that by focusing into cooperative economic and social agenda, countries will eventually reach into some sort of sense of mutual security. Reliance on economic and cooperative dimensions are also reflected in the latest release of the ASEAN Outlook on the Indo-Pacific, which Indonesia originally proposed.

At a first glance, such approach seems so much to mirror the functional drive that once translated European cooperation into political integration. Some scholars argued that institutional forms of European integration travelled from Europe to Southeast Asia, although these were adapted to local needs.[4] However, a strong commitment to sovereignty in the Hobbesian sense is more apparent in the way ASEAN has been established. The norm continues to characterise ASEAN and ASEAN-led institutions, in which competing great powers are active members.

Indonesia, with ASEAN, really believes that its institutional design is more resilient in dealing with geopolitical challenges. ASEAN members are persuaded that anything like Brexit could resemble its future.[5] Indonesia has always believed that Jakarta’s, and ASEAN’s “convening power” allows countries with different political regimes and economic systems to sit and work together to figure out cooperative ways to address common problems. Can Jakarta adapt the ASEAN approach to a more global multilateral outlook through a successful G20 presidency? The stakes, at least in the eyes of President Jokowi, are high.

Boycott and walkout of the forum will be extremely undesirable for Indonesia. Great powers attendances in meetings hosted by the Indonesian government are key performance indicators now for Indonesian diplomacy. The trip to Europe was not only a way to hold on to the national foreign policy doctrine and to address risks of economic and food crisis, but also to secure attendance and a successful G20 summit. Indonesia will also be next year’s ASEAN Chair. Indonesia believes that successfully conducting the G20 presidency will be a litmus test for its diplomatic power.

As Europe now faces multipolar challenges to realise its foreign and security policy in the Indo-Pacific,[6] Indonesia’s current strategic moves describe a nuance about how extra-regional powers can work within existing institutional and bureaucratic measures. Indonesia will tend to promote ASEAN mechanisms that are inclusive and cooperative in outlook, where ASEAN tends to rely on dialogue and process-based orientation. Countries like the US might show their rhetorical commitment to ASEAN centrality, but for many ASEAN member states, including Indonesia, setting up new minilateral platforms such as AUKUS and the Quad may challenge ASEAN existence. ASEAN primarily relies on process-oriented mechanism, while these minilateral platform may offer more tangible measures and result oriented mechanism.

Jakarta hopes that the greater role of Europe in addressing crisis and promoting peace and security in the region will focus more on common needs and multilateralism and less on antagonising moves against certain powers, first and foremost China. This may include some specific areas such as digital connectivity, economic recovery, public health provision, trade promotion, infrastructure development, maritime law enforcement and sustainability.

At the same time, President Jokowi has sought to open a channel of communication between Ukraine and Russia, but he always believes that true solution will require great powers in Europe and America, at to some extent Asia, working together to ameliorate sources on tension and focus on potential cooperative dimension.