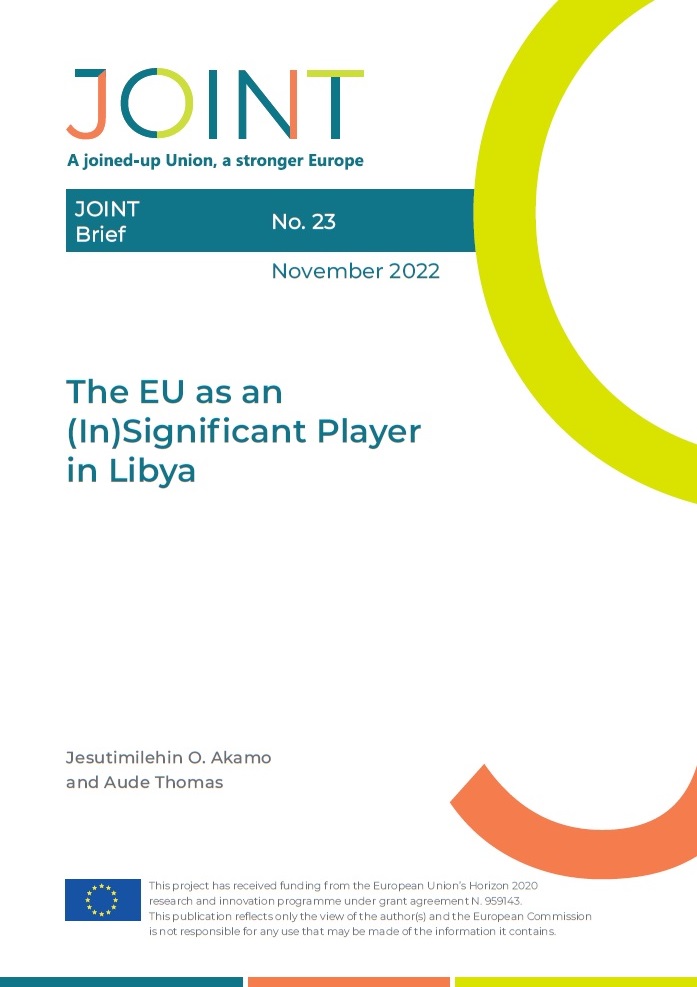 Jesutimilehin O. Akamo is the Research Coordinator at the Africa Peace and Security Programme (APSP) of the Institute for Peace and Security Studies (IPSS), Addis Ababa University. Aude Thomas is a Research Fellow at the Fondation pour la recherche stratégique (Foundation for Strategic Research, FRS), Paris.

Factors that limit the EU’s effectiveness in promoting the Libyan peace process can be categorised into three streams: damage control approach, soft power approach and EU internal divisions.[1] To a convincing extent, these factors explain why the EU cannot be considered a significant player in the Libyan peace process. However, there are alternative means through which the EU can enhance its Libya policy without switching to a hard power approach, which may impede the ongoing UN-led peace process and constitute violation of its norm.

The damage control approach refers to a type of response that is limited to mitigating the impact of a crisis. Migration is one of the effects of the Libya crisis on Europe. Migrants move from and through Libya into the EU because of conflicts and socioeconomic hardship in their respective home countries.[2] As migration flows fuel political divisions in most EU countries, EU governments tend to look at the conflict in Libya through the migration lens.

Unsurprisingly, the EU Emergency Trust Fund in Libya has supported actions whose ultimate goal is to reduce migration flows. The Trust Fund covers three programmes: protection and assistance to those in need, stabilise Libyan municipalities, and integrated border management.[3] The entire arrangement tilts towards damage control. However, this approach is not sustainable because the EU’s efforts do not address the root causes of the crisis. For example, none of these programmes focuses on addressing perceived or actual wrongs and injustices committed by one Libyan group against another and factional communalism, although it addresses institution building through stabilisation.[4]

Also, the migration lens adopted by the EU has translated (in many cases) into empowering local forces and armed groups willing to control flows in exchange for EU and EU members assistance, at the cost of migrants suffering. Several NGOs, among which Human Rights Watch, have reported testimonies of migrants being tortured and living in unsanitary and inhuman(e) conditions in detentions centres.[5] In April 2020, NGOs issued a joint statement calling upon EU institutions “to review and reform the bloc’s policies of cooperation with Libya on migration and border management and control”.[6]

While the UN is making efforts for facilitating a transition to a working pluralist state, the reality is that Libya’s political context and state institutions are too fragmented to support an effective and legitimate central government. The leading Libyan political actors belong to identity groups with conflicting agendas with a weak resolve to compromise for the sake of peace – another manifestation of the fragmentation depth in Libya.

Furthermore, no concrete action has been taken to implement or amend the current transitional justice law in Libya.[7] The focus so far in Libya has been on political reconciliation.[8] With societal and political fragmentation, an ineffective transitional justice, deficiency in capacity and capability of a central authority and lack of representation of state institutions across board two things are likely: regress into violence or a prolonged peace process with heightened tension and a highly inflammable context awaiting just the right trigger. Against this backdrop, the programmes covered by the EU Trust Fund are an insufficient response to the realities of Libya’s crisis.

The soft power approach relates to the ability to obtain preferred outcomes by attraction or persuasion in place of coercion or payment.[9] In the Libyan context, the EU soft power approach is made up of “capacity building, a shared system of values and the economic dimension of its actions”.[10] In this regard, the EU has pursued peace in Libya and supported the UN-led mediation efforts though diplomatic actions and bilateral support. For example, the EU provides aid and technical assistance to strengthen civil society, human rights and free media, democratic governance, health services and Covid-19 response, entrepreneurship, youth empowerment, and gender equality. It has programmes to protect and assist migrants, refugees, vulnerable groups and communities (especially communities hosting migrants), as well as other capacity building exercises to support institution building.[11] Moreover, the European Union Integrated Border Assistance Mission in Libya (EUBAM Libya) and the EU’s Operation EUNAVFOR MED Irini can arguably be classified under the soft power approach because from the Libyan viewpoint they are a form of aid to Libya in terms of border management and arms control.

Despite some success of such actions, the soft power approach is a factor actually limiting the EU’s role in Libya’s peace process. This is not because it is a bad policy. Rather, the core issue is about compatibility with the realities of the conflict’s dynamics. The soft power approach furthers that very reactive/damage control approach illustrated above because it merely responds to the impact of the crisis and does little to shape the power game between foreign powers at play in Libya and how it affects the peace process. Such countries as Turkey, the United Arab Emirates (UAE), Egypt, Russia, as well as some EU member states (that provide support to regional or local actors outside the EU’s scope), directly or indirectly, are all involved in the conflict, often backing rival parties. This is also where the EU’s internal division factor comes into play – the distance between the EU’s agency and that of (some of) its member states.[12] Migration, security and energy are the thematic issues that drive European countries’ policy towards Libya, but not always to the same effect. France and Italy are examples of countries that have adopted different strategies (that is, support for rival factions) in pursuit of nominally equal interests in migration management, fight against terrorism and illicit trafficking, and energy security.[13] The French-Italian divisions have indeed impeded the EU’s ability to translate a common interest into one agency.[14] Examples include the disagreements about the mandate and tasks of the EUNAVFOR MED Irini and even actions that could be construed as sabotage, like providing conflict factions with military hardware. While France and Italy have somewhat downgraded their competition recently, the problem of internal contestation within the EU persists.[15]

The EU is the only major actor playing the soft power game. This keeps the EU outside the actual dynamics of the crisis as the hard power game dominates. While the soft power approach is theoretically good for Libya and Libyans, it has proven insufficient to bring a lasting solution because the fragmentation and power game at regional level and its interaction with the local actors remain unaddressed. For imagery, see the figure below as an example.

The figure above attempts to illustrate how the level at which the EU is playing as an institution does not give it leverage to contribute to agenda setting. In the case of the UN-led talks, for example, the discussions are determined by the actions and inactions of the actors playing hard power. The EU does not put weight on the conflict actors, especially the regional actors that support opposing local factions. At best, what the EU can provide is support peace once it has been achieved, post-conflict reconstruction and development (PCRD) and transition to democracy; or mitigate the impact of the hard power play of other actors (which it already does). It is however vital to note that the EU is not to blame for this condition as this cannot be ascribed as a fault of the EU as on organisation. Rather, it is the combined effect of the intra-EU divisions, geopolitical rivalries between foreign powers, as well as Libya’s internal fragmentation.

To move beyond the damaged control and soft power approaches, EU member states should agree on actions both supplementing and complementing the UN-led national reconciliation process while the latter is still ongoing (thus getting around the constraint imposed on it by power politics, as such actions would not be conditional on the political process to be completed).

The needs to enhance its support for transitional justice in Libya to address past violations by doing more to implement the EU’s Policy Framework on support to transitional justice. This move will represent a starting point to build trust and the required institutions for a post-election Libya. This also involves supporting local ownership of peace by Libyans and encourage a pathway towards the conflict’s de-internalisation.

The EU’s Policy Framework on support to transitional justice list measures to promote transitional justice. One of them is about supporting reforms of national criminal legislation and initiatives that will reinforce or develop national investigative, prosecutorial and judicial capabilities and provide protection and assistance to victims. In view of this, the EU can support the International Criminal Court and alternative mediation practices involving Libyan society. The second measure involves promoting truth seeking initiatives while the third and fourth measures aim at encouraging a participatory and victim focused approach to reparations policies and promoting justice and security sector reforms.[16] This framework could be implemented in Libya.

In addition, the EU needs to connect with the people and the situation on the ground. The EU should explore the economic dimension which it prioritises by seeking means through which trade can be enhanced. This will allow for an improve interaction with and amongst Libyans at grassroots. Trade for example is a proven tool to enhance cohesion.

The EU may not be able take that top-down approach or play the hard power politics. But it may still be able to forge a route for itself to contribute to agenda setting through the people the “hard power players” purportedly but inadequately represent.


Jesutimilehin O. Akamo is the Research Coordinator at the Africa Peace and Security Programme (APSP) of the Institute for Peace and Security Studies (IPSS), Addis Ababa University. Aude Thomas is a Research Fellow at the Fondation pour la recherche stratégique (Foundation for Strategic Research, FRS), Paris.

[1] Institute for Peace and Security Studies (IPSS), Roundtable: Post-Election Libya and the European Union, JOINT virtual roundtable, 23 February 2022, https://ipss-addis.org/?p=11816. The roundtable brought together experts and researchers on the Middle East and North Africa (MENA) region, as well as a former diplomat Libya.

[4] Ibid. This was also reiterated at the roundtable.

Protests and Drones Push EU–Iran Relations to the Brink