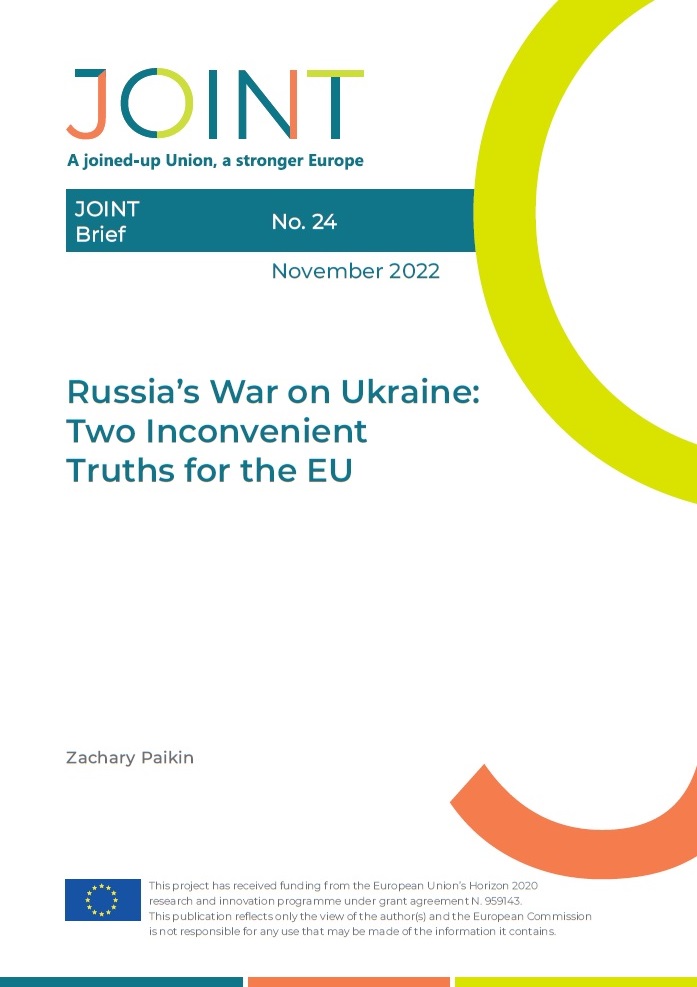 Following a spectacular Ukrainian counteroffensive and the retaking of Kherson, the war in Europe’s east has moved into a new phase. The immediate focus is now shifting to the chilling effects of winter – both on the frontline and on Western morale. That said, the EU and its member states are now confronted with two key – and unavoidable – strategic questions.

The continued risk of escalation

The first is short-term. Russia’s partial mobilisation may help to slow its losses in the territory it has occupied since the start of the war. But if Ukraine has indeed acquired “irreversible momentum”,[1] this raises questions over how far Kyiv can continue to press its advantage before Moscow chooses to escalate even further, possibly employing non-conventional means. Russian President Vladimir Putin’s decision to annex four Ukrainian territories has already demonstrated his penchant for escalating in the face of setbacks, especially when the benefits of de-escalating are unclear.

Given the existential stakes the Russian regime has attributed to this war, Ukrainian attempts to restore the entirety of its internationally recognised borders by force may engender unintended knock-on effects, such as Moscow’s use of nuclear weapons or – however unlikely – the destabilisation of the Russian state. For different reasons, these two scenarios present an arguably greater security threat than Putin’s current near-total disregard for the established norms of the European security system. The former risks mass murder, environmental disaster, and possible further escalation to a direct NATO–Russia clash. The latter could produce political violence and fragmentation across the vast territory of a nuclear-armed state.

It should be recalled that Putin made the decision to invade Ukraine before the country obtained NATO membership. Nominal (as opposed to concrete) promises of eventual accession for Kyiv were said to be a concession to Moscow given that few (if any) steps were taken to advance its membership prospects. Yet the West misread Putin’s willingness to use force to advance geopolitical aims. Similarly, it is difficult to know for certain where he will draw the line when it comes to nuclear use.

Although EU member states have retained their autonomy with respect to the breadth and timing of economic sanctions and the level of military assistance provided to Ukraine, Brussels has refrained from weighing on Kyiv with respect to when the fighting should stop. Unfortunately, the need to address the risks of escalation suggests that restoring Ukraine’s territorial integrity will require a deferred process – especially as it relates to Crimea, a territory of historical importance to Russians and of great political significance to Putin personally.[2] This much was acknowledged during talks between the belligerents held in the war’s early weeks,[3] even though Ukraine later abandoned that stance following its military successes and public opprobrium over Russia deliberately hitting civilian targets.

Making (temporary) concessions on Crimea and other occupied territories would put the EU in an uncomfortable position, given that preserving a rules-based order lies at the core of its worldview. Such compromises would occur at a time when Manichean views of international relations, such as the increasingly popular “democracies vs. autocracies” framework, are gaining currency in the West. Yet these binary worldviews obfuscate the risks inherent to great power conflict.

The High Representative for EU foreign and security policy, Josep Borrell, has long insisted on the need for the EU to learn to speak the “language of power”.[4] This expression demonstrates an understanding that international law, multilateral institutions and rules-based cooperation are not the only mechanisms which shape interstate conduct today. Some scholars have long recognised this, conceptualising the balance of power and the special role of great powers as pillars of the international order on a par with diplomacy and international law, with the latter often unable to function without the former.[5]

It is true that one cannot have a functional international order in which great powers invade their neighbours, annex their territory and threaten nuclear strikes against those who stand in their way. Yet during the Cold War, the United States consciously privileged a strategy of containment over attempts to roll back the Soviet Union’s sphere of influence in Europe. We reject the notion of spheres of influence today, but the devastating consequences of the now years-long standoff between Russia and the West over a country situated on the former’s border illustrates how legal principles alone cannot substitute for a basic modicum of great power consensus in ensuring a stable international order.

Russia’s ambition to dominate its neighbours should be roundly rejected, which means that the current situation does not provide a basis for a stable order. But this should not prevent EU policymakers from addressing the question of how a stable continental order that takes account of Moscow’s security concerns could one day be constructed. This leads to the second and longer-term question of what sort of relationship the EU wants to have with Russia after the war.

EU–Russia relations after the war

In the wake of Putin’s illegal annexations, a political settlement between Russia and Ukraine (and the EU) has become impossible. A possible scenario is a cessation of hostilities in several months’ time and the establishment of a Korean-type line of control, the exact location of which will be determined on the battlefield.

The EU’s approach to date – sanctioning Russia, assisting Ukraine and using the opportunity to pursue defence integration – may be a suitable policy mix for years to come. A deterrence-based model thus offers the most plausible path forward, but the political stakes inherent to the question of the nature of Russia’s relationship with Ukraine indicate that an active escalation ladder – one which the West will not necessarily be able to climb up or down at will – will remain in place. As such, even if the most immediate escalation risks today are averted, the EU will face a potentially volatile situation on its eastern frontier for some time.

It bears mentioning that Putin’s removal from power will not automatically change this dynamic. His successor could be as committed to seeing Russia’s war aims through as he is, blaming Russia’s military failings on Putin’s incompetence as a pretext to escalate the war. Even if Putin’s successor wished to bring current hostilities to an end, which may be difficult given the domestic political climate in Russia, Moscow’s security concerns vis-à-vis the West – widely shared among the Russian elite, even when groundless – will remain an issue for EU leaders to address.

Given its significant military setbacks, some may now dismiss Russia’s great power status. But it remains Europe’s most populous country. It retains significant capacity for disruptive power and still holds a veto on the UN Security Council. And it has rebuilt its national strength after many defeats and collapses throughout its history. For centuries, Russia has taken the form of an empire rather than an ordinary nation-state. This imperial legacy has not been entirely overcome in the short period of time since the Soviet Union’s collapse. Russia’s transformation into something capable of fully integrating into a political and security order based largely on Western terms is likely to take decades, not years.

In short, one cannot delink the issue of Ukraine’s future from the complex task of building a stable European security order. And if the EU wishes to be taken seriously as a leading actor in this order, then it must play a role in determining what sort of paradigm should structure the continental security system beyond the indefinite application of deterrence.

The EU’s adoption of its Strategic Compass last March was a positive step forward for the EU as a “geopolitical actor”. But member states need to move beyond common threat assessments and towards more concrete discussions over what (realistic) future they envision for the continental security order – and how best to manage the dangerous road from here to there.

Once the dust has settled on this war, is the desired outcome a new equilibrium with Russia based on strategic containment? Arrival at some form of peaceful coexistence? Or full-blown regime change as the only veritable guarantor of European security? This has yet to be explicitly spelled out. But any one of these options would require a massive investment of thought, energy and resources.

As of today, no option appears to be without its shortcomings. Openly pursuing regime change is fraught with security risks. Peaceful coexistence appears out of the question now that Russia openly pursues a neo-imperial agenda. Containment appears inevitable, although one cannot guarantee that this would create an entirely stable equilibrium on the continent.

That said, Europe’s new security order will not be born today – it will only arise over the long term once new conditions are in place. What should be arrived at today is a common understanding among EU member states of what that long-term vision should be, which should ideally be a less divisive endeavour than more short-term debates such as how quickly to impose new rounds of sanctions or how much to isolate Putin. Nonetheless, such an undertaking could serve to clarify – at least in part – what policies today might help to make this vision a reality, in the process fostering a deeper understanding of the common EU interest.

In short, we need a dose of realism in the short term and continued idealism in the long term. While continuing to defend Ukraine’s sovereignty, EU leaders should actively discourage actions which bring an unnecessarily high risk of escalation, such as a direct Ukrainian attempt to retake Crimea by force.[6] Over the months and years to come, efforts at deterrence must be paired with an understanding that a fully stable order cannot be constructed by forever excluding Russia.[7]

[4] European External Action Service, HR/VP Borrell in India: “Europeans are Beginning to Realise that We Have to Learn to Talk the Language of Power”, 16 January 2020, https://www.eeas.europa.eu/node/73087.