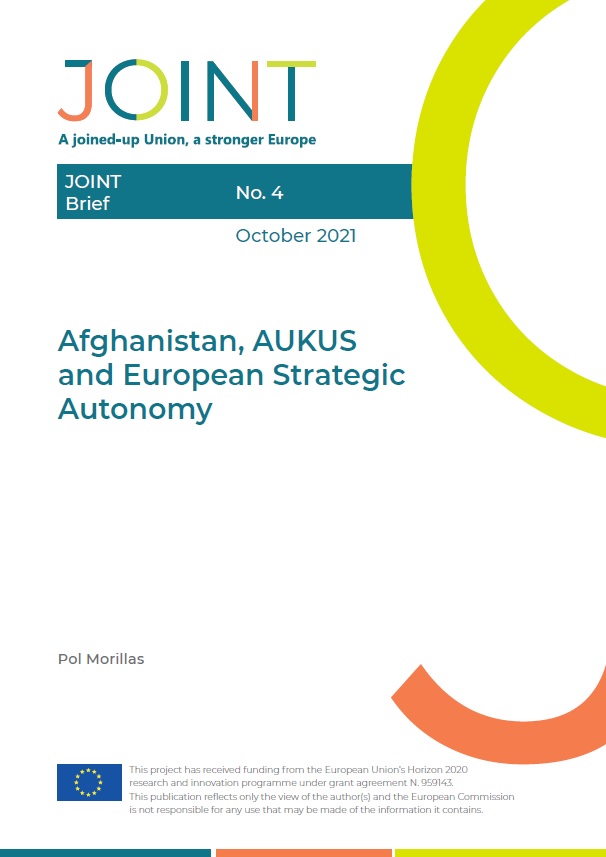 Security and defence are increasingly grabbing the spotlight in European public debates. In just a few weeks, the withdrawal of Western forces from Afghanistan and the deal between Australia, the United Kingdom and the United States (AUKUS) to share nuclear submarine technology and step up their security partnership in the Indo-Pacific have reinvigorated the debate on the EU’s strategic autonomy and shifting strategic alliances in global security. While the American withdrawal and the realignment of forces in response to China’s growing strength are increasingly discernible, the European Union has not moved yet from intent to action in the domain of security and defence.

“Strategic autonomy”, in EU parlance, is the ability of the European Union to muster the necessary means to achieve its foreign policy aims in cooperation with partners when possible but acting alone when necessary. This long-running debate on strategic autonomy in European capitals, traditionally limited to the realm of defence, has now extended to trade, cybersecurity, artificial intelligence and global health, among others.

The need for greater capacity for autonomous action lies in the realisation that Europe’s traditional ally and guarantor of European security, the United States, is consolidating a strategic shift towards the Pacific, while also divesting itself of its role as global policeman and structuring its foreign policy mainly along more narrowly defined national interests.

The US rivalry with China is emerging as the core geopolitical factor of the twenty-first century. In spite of the impact of transnational phenomena like covid-19 and the various manifestations of the climate crisis, the world is thus re-experiencing zero-sum dynamics, with powers such as China, Russia and India reinforcing their status and questioning the foundations of what used to be a US-centred international order.

The European Union has significant commercial and regulatory power, but it lacks security and defence capabilities – as well as the political will to improve them. EU security and defence capabilities remain fragmented among the member states and subordinate to NATO. The persistence of diverging interests, different threat perceptions and dissimilar historical experiences hinder the consolidation of an EU strategic culture that might act as a spur for a more geopolitical Europe.

US conduct over Afghanistan was, understandably, a source of frustration in the European Union. The 2020 Doha Agreement between the Trump Administration and the Taliban, which set the terms of the US withdrawal and which the Biden Administration largely upheld, was negotiated without prior consultation with the European allies. The latter have perceived the modalities of the US pull-out as a bitter show of disregard after twenty years of allied intervention.

The bungled management of the withdrawal and absence of diplomatic tact do not hide the fact, however, that Europe was always in the back seat of the Washington-led intervention. The Western presence in Afghanistan had a European flavour as it included the bolstering of the rule of law and protection of human rights as core objectives, which is in line with the established EU foreign and security policy discourse. The chaotic ending of the Afghan mission emphasises the EU’s need to attain strategic autonomy, especially when the United States unilaterally decides to leave the field or when, acting under the American umbrella, the Europeans are unable to correct any strategic errors they determine are being committed.

For its part, the AUKUS pact directly resonates with the EU’s and, through it, France’s objective to move towards greater strategic autonomy. For one thing, the deal demonstrates that international relations are increasingly structured around security and defence, although not exclusively and traditionally understood as territorial defence but rather as a global and multi-sectoral approach in which cybersecurity, artificial intelligence and security of trade routes have key roles. All these elements, including of course defence against attacks on infrastructure and undersea Internet cables, are part of the AUKUS security pact (in addition to supplying Australia with nuclear submarines at the expense of its earlier contract with France). The very day the new alliance was announced, Brussels published its Indo-Pacific strategy in a document replete with references to promoting stability, security, prosperity and sustainable development in the region but lacking in operational security and defence objectives.

EU strategic autonomy continues to be a proposal on paper to little practical effect. The presidents of the European Council and Commission strongly condemned what they saw as a second consecutive affront coming from Washington while they considered Paris’s (unsuccessful) request to postpone the EU–US Trade and Technology Council as an expression of protest. Some member states, wary of the French interpretation of the concept as autonomy from the United States, took a distance from Paris’ aggrieved protestations, once again showing that if such autonomy does not exist, it is because of internal divisions in the European Union.

AUKUS also exemplifies a major strategic error that was made during the negotiations over the UK’s exit from the Union. While the negotiators focused on a trade deal that would respect single market rules and continue bolstering peace in Northern Ireland, they relegated to the background the EU’s strategic relationship with the United Kingdom, its main partner in defence capacities and global outreach. For Downing Street, the agreement with the United States and Australia is a chance to validate its “Global Britain” aspirations while exacting revenge for the hard-line stance of France and the European Union over Brexit. Understanding that the relationship with the United Kingdom is only about economic and trade stability is a fundamental error for EU strategic autonomy.

Finally, AUKUS shows how, with the transformation of the international order, today’s alliances are more flexible and complementary to traditional institutional frameworks. The “China first” logic of US foreign policy takes precedence over loyalty to traditional partners. The Quadrilateral Security Dialogue (Quad) involving the United States, Japan, India and Australia, and the “Five Eyes” intelligence alliance comprising Australia, Canada, New Zealand, the United Kingdom and the United States, are flexible understandings concerned with China’s increasing assertiveness and aggressiveness towards its neighbourhood. The Europeans have been too complacent in believing that US President Joe Biden’s insistence on creating coalitions of democratic countries, including through his proposed “summit of democracies”, would strengthen the Union. In Biden’s eyes, the democracies that matter in the face of China’s rise are in Asia more than in Europe. Non-superfluous alliances are the ones that serve a common geopolitical interest, and facing China’s rise is an objective the United States shares, especially with countries in the Indo-Pacific.

International stability entails rather more than managing trade flows, pandemics and the climate crisis. The AUKUS and Afghanistan episodes remind us of the importance of security and defence in an increasingly Hobbesian world. For too long now, the absence of direct threats has led the European Union to drag its feet on developing its own capabilities, even if they are meant to be complementary to those of the United States. European strategic autonomy today requires action and political will in terms of both capabilities and alliances with strategic partners. France, as an essential player in European defence after Brexit, must move on from its disgruntlement over AUKUS and help to construct a Europe which finally speaks the language of power.

A Spanish version of this paper was published in the print and online editions of El País on 18 October 2021: “Afganistán, Aukus y la autonomía europea”, https://elpais.com/opinion/2021-10-18/afganistan-aukus-y-la-autonomia-europea.html.